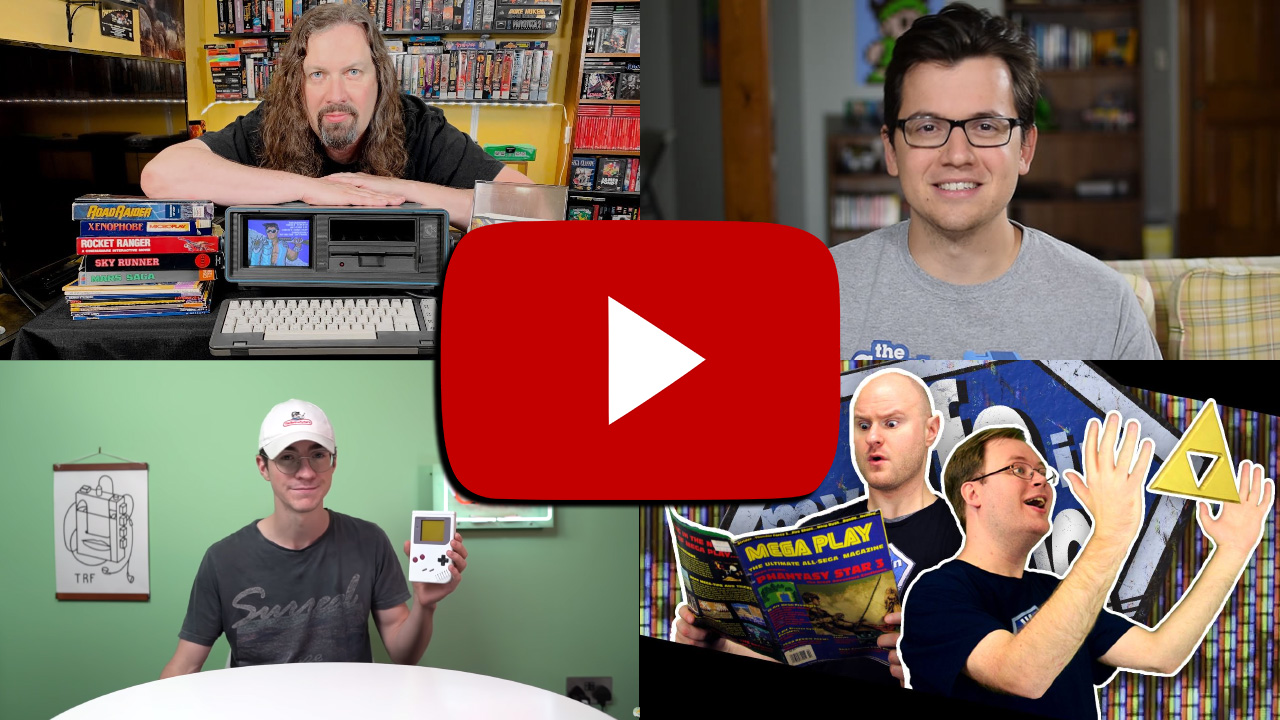 Since there are so many great content creators covering retro video games, we thought that it would be convenient to have a handy little list of all the best YouTubers in one place.

If you’re looking for great content about retro Sega games (from the Sega Master System to the Sega Dreamcast), look no further than Sega Lord X. You’ll always walk away from a Sega Lord X video knowing a little bit more about Sega’s history and some of the great games published for Sega hardware.

If you like retro game hunting, you’ll love Pixel Game Squad. The Squad takes you on adventures to swap meets, gaming conventions, game stores, and more in their show, TheNESPursuit. Thing of American Pickers, but with video games and other retro goodness. These friends are high-energy, relatable, and all-around cool guys. You should definitely check them out.

The Retro Future is all about the GameBoy. On Elliot’s channel, you’ll see him mod GameBoys of all types, review obscure GameBoy accessories, and show off rare GameBoys. Needless to say, you’ll love The Retro Future if you can’t get enough of our favorite Nintendo handheld. You’ll come for the GameBoys, but you’ll stay for the comfy atmosphere.

SNES Drunk started as a channel for Super Nintendo game reviews, and while SNES Drunk still features plenty of SNES reviews, he has made videos for several different consoles. On SNES Drunk, you’ll find game reviews, lists, myth busting, and more. SNES Drunk videos are quick and easy to watch.

MetalJesusRocks is the quintessential retro gaming YouTuber. When you watch a MetalJesusRocks video, it becomes instantly obvious that he is truly passionate about retro gaming and game collecting. He has a massive library of videos that range from game colleting guides, game reviews, game hunting, and more.

My Life in Gaming

My Life in Gaming is a channel hosted by two people, Coury and Try, and their videos are mostly about getting the best video quality for your retro games. They have several extremely well-produced video “lessons” on RGB video and retro gaming video quality. My Life in Gaming also publishes the occasional video about handhelds, new retro gaming hardware, and other gaming topics. Their uploads aren’t as frequent as other YouTubers, but it’s always a treat when a new video is finally released.

Gaming Historian, hosted by Norman Caruso, publishes mini-documentaries about the history of video games. Videos published by Gaming Historian are well-researched, and you’ll always learn something new after watching.

I love this channel. The videos have grown from short, meme-filled, 5 minute reviews to full deep-dives into each game. Newer videos often include revealing interviews with the developers. Pandamonium gives every game a chance and genuinely wants to understand how the finished products were made. I never thought I’d listen to someone talk about Ghen War for 20 minutes and think, “ya know I still want to play Ghen War.”

KidShoryuken is one of the best retro gaming YouTubers based in Japan. KidShoryuken regularly publishes retro game hunting videos, where he films what it’s like inside of Japanese game shops. You’ll also find reviews of Japanese exclusive games on this channel.

Game Sack publishes a variety of videos about retro gaming, including game reviews, console reviews, lists, and everything in between. They publish a new long video every week.

Jcontra is one of the few English-speaking retro gaming YouTubers in Japan, and he frequently publishes videos about game hunting and game collecting in Japan. You’ll also see retro gaming guides and tutorials on this channel. It’s definitely worth checking out Jcontra if you’re interesting in Japanese retro games.

RetroRGB is a channel about — you guessed it — RGB video in retro video games. However, RetroRGB also publishes reviews and first impressions of retro gaming hardware in general. This is the channel for you if you’re interested in getting the best video quality for your retro games. He also has an amazing and informative website.

Related: How To Play Nes Tetris Like a Pro

Despite the somewhat childish channel title, their content is informative, unique, and interesting. Hard4Games has carved out a niche in the retro-Youtube landscape by researching beta-versions or prototypes of games, consoles, and peripherals. The channel has great videos about the pre-release versions of N64 classics like Ocarina of Time, and often features unique, one-of-a-kind development hardware.

If you’re looking for generally wholesome, strangely off beat musing on video game content, Scott Wozniak is probably right up your ally. Informative but not overly-researched, Scott’s videos are mostly his opinions on various video game topics tied together with skits and jokes.