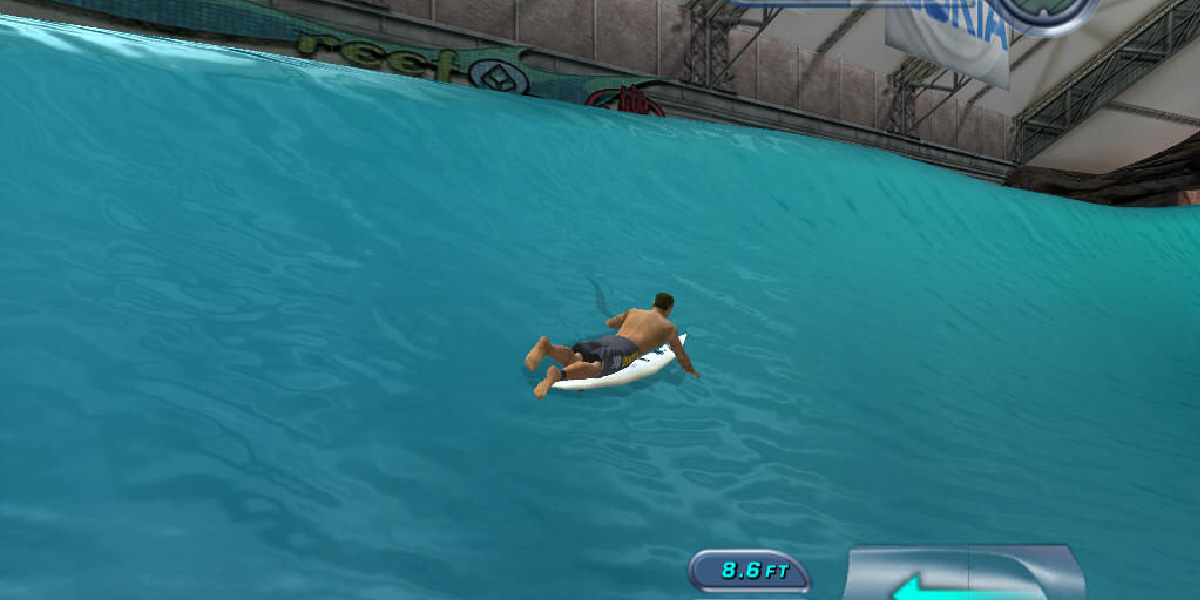 If you’re like me and have never surfed a day in your life you probably had a couple of questions the first time you saw Kelly Slater Pro Surfer. Questions like, “who is Kelly Slater?” and “this is just a Tony Hawk’s Pro Skater clone.” Okay, the second one wasn’t a question. But you still probably thought it, right?

Well Kelly Slater is apparently one of the best surfers in the world; the “Michael Jordan of surfing” as his in-game bio states. Secondly, this game actually isn’t a straight THPS clone— although it’s made by the same developer.

Yes, Kelly Slater Pro Surfer has it’s own game mechanics and move sets that are markedly different from your typical Tony Hawk game.

Sure, it resembles the famed skate series, but there’s enough differences to judge Kelly Slater Pro Surfer on it’s own merits.

That being said, my judgement of this surfing adventure’s merits is… not great. The game, which mirrors THPS’s arcade style time-limited levels, is weirdly overly-complicated.

After about an hour of playing (and going through the tutorials) I still felt like I didn’t grasp all the controls. The levels lack the exploration of the THPS series. Instead, you just ride the wave till you bail, respawn and then ride the wave again until time runs out. There are apparently 8 levels, but I’ve only managed to play the 3 unlocked at start.

What I do love about Kelly Slater Pro Surfer is the time-capsule nature of this game, it’s so 2002! Every level is prefaced by real footage of surfers and Slater’s voice over reminiscing about his time catching gnarly waves at that location.

The options menu is even better; you enter cheat codes into a Nokia brick phone! There’s even a 30 minute long making-of video just thrown in there with music from Chicago punk trio The Lawrence Arms.

I reviewed this game based on the Xbox version, but Kelly Slater Pro Surfer was released on all major consoles (PS2, Xbox, GCN) and it’s still inexpensive. Complete prices for all three versions are hovering around $10 on eBay.

If you love surfing, or love the Tony Hawk series this game might be worth a pick up. Otherwise, let it be. You’re not missing much.