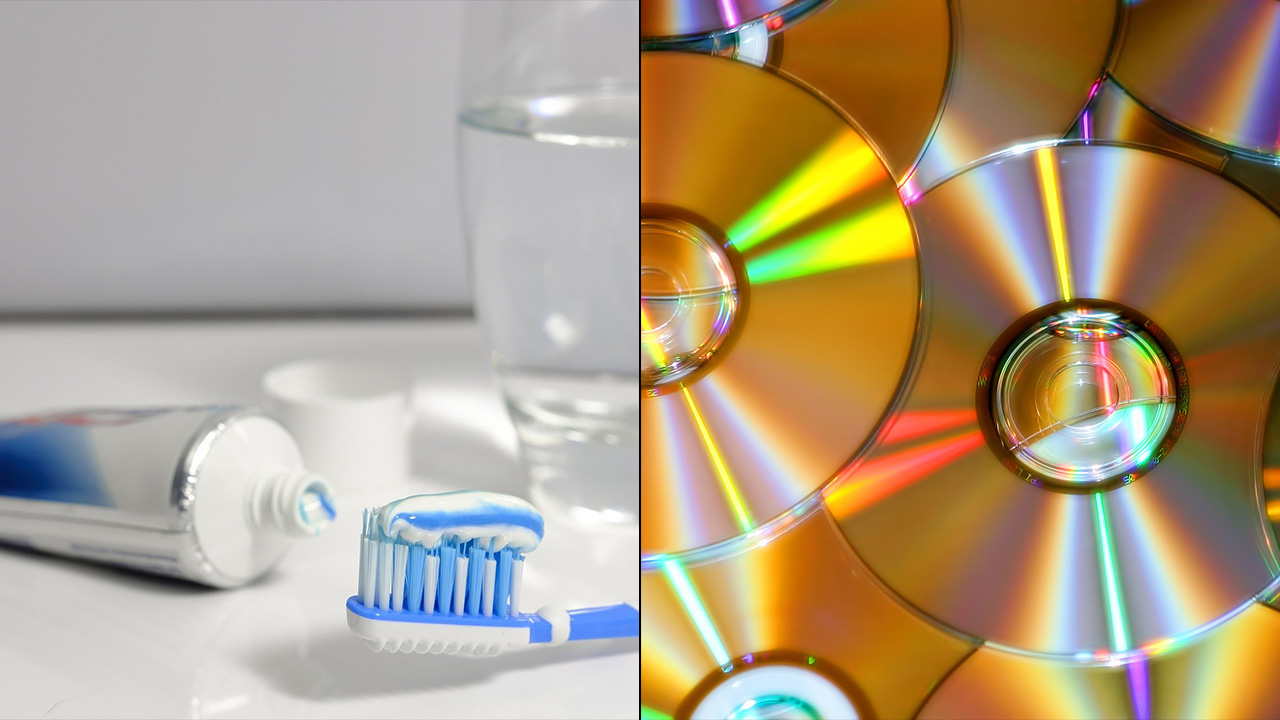 Almost everybody has had a scratched video game or CD that either skips or doesn’t run at all. In a desperate attempt to revive your scratch retro game, perhaps you’ve searched for advice online only to find hundreds of people suggesting that you lather your scratched discs in toothpaste or peanut butter to “fill in the cracks” or something to that effect.

In reality, the toothpaste trick is highly ineffective. If you’ve gotten to the point where you’d even try this trick, chances are that you’ve already attempted to clean your disc, which means toothpaste won’t do you much good either. And if you’re unlucky and not careful, you could even scratch your disc further with the toothpaste trick, which would be highly unfortunate if you’re dealing with a rare retro game.

So how do you fix scratched discs without toothpaste? Here’s our suggestions.

Before you try anything that could permanently change your disc or hardware, you should just attempt a little clean. Sometimes a simple clean can work wonders, especially if the culprit is actually smudges rather than scratches.

You’ll need a micro fiber cloth and a little bit of water. Preferably, you’d have a spray bottle with distilled water available. The extra chemicals in tap water could potentially harm your discs, even if it’s highly unlikely. The micro fiber cloth ensures that you won’t accidentally cause further damage, which is possible with paper towels.

Just spray a little bit of water on the disc, and use the micro fiber cloth to clean the disc. It’s best to clean discs by wiping the cloth in straight strokes starting from the center of the disc outward. Don’t make any circular motions. Just continue making these straight motions all around the disc.

Get your games resurfaced

If a simple clean doesn’t do the trick, don’t worry. Most of the time, a scratched disc can work again after a good resurfacing.

Resurfacing is the process of smoothing the surface of damaged and scratched discs so lasers can properly read them.

Resurfacing is also a little bit risky because discs are more susceptible to damage afterwards. Obviously, you can only resurface a disc so many times before it’s no longer usable.

Fortunately, resurfacing will more than likely fix your disc if there isn’t irreparable damage, such as deep cuts or damage to the top part of the disc. And it sure beats using toothpaste on scratched video game discs.

You can usually get your discs resurfaced at a local game shop for a small fee, which is definitely worth it, especially if the game costs more than a few dollars.

You can also contact your local library to see if they have a disc resurfacing machine. You’d be surprised — libraries often lend out movies and games, so they need to be able to fix any scratches that naturally incur.

If you don’t have any local game stores or library to resurface your discs, you can always send them over to eStarland, which only charges $3 for each disc repair.

Your laser could be going bad

If your disc still doesn’t work properly after being resurfaced, there’s still one possibility to consider before all is lost. The problem could be that your hardware has a bad laser, causing it to improperly read some discs.

Before replacing the entire laser, just try cleaning it. Some cotton swab and some isopropyl alcohol goes a long way. And it wouldn’t hurt to take apart your console and clear out some of the dust there as well.

If that doesn’t work, you might need to replace your laser. Fortunately, laser replacements for many consoles are pretty cheap. The process of replacing the laser usually isn’t too difficult either.

Alternatively, you could send your console over to eStarland for repairs because they offer the absolute lowest console repair prices out there.

Hopefully, by this point, your scratched discs are working once again. If not, that’s okay. It’s still worthwhile to hold on to your old discs — maybe new technology in the future will be able to restore them to their former glory. Just please don’t try using toothpaste on your old video game discs.