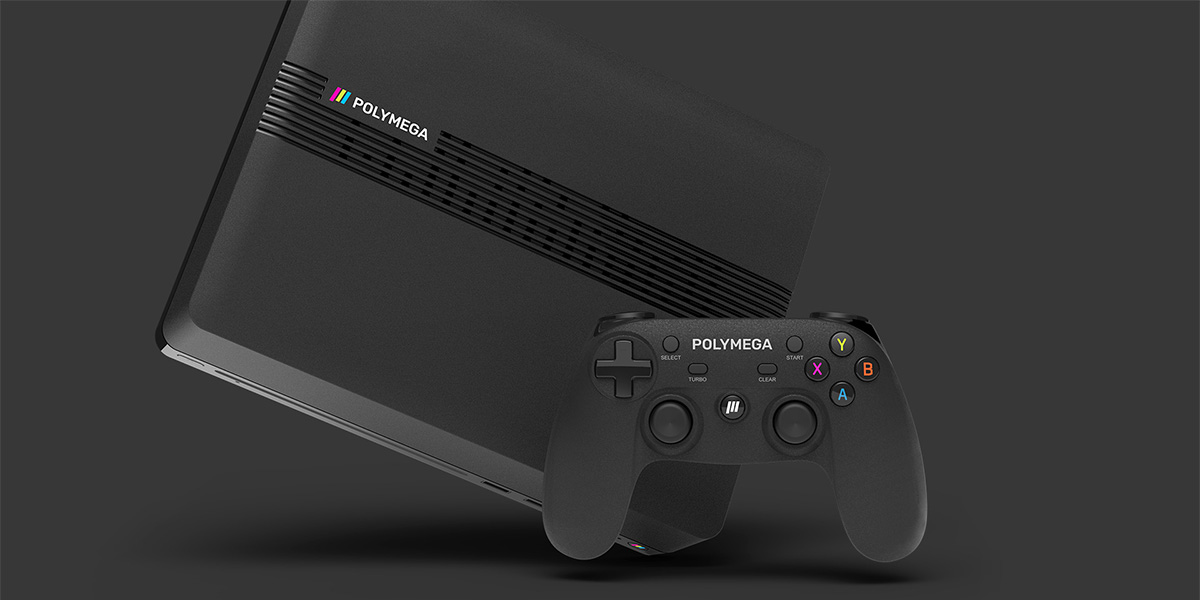 If you’re like me and wired into retro video game news through all your social media channels, then you’ve heard folks discussing or dissing the Polymega. Maybe you’ve wondered what that was all about? Intended to be an all-in-one retro gaming station that will eventually replace your stack of consoles and mess of cables, the Polymega has certainly sparked a lot of debate in retro gaming communities.

In short, the Polymega is a software based emulation device that allows users to play retro games in HD using their original software.

One of the biggest selling points is that Polymega will save a copy of the game on the console’s hard drive that it can use to boot from then onward. This is targeted at collectors who want to preserve their own physical media or folks who aren’t attached to owning stacks of physical media.

There’s some other stuff too, like an eStore, but I’m going to be honest I’ve never heard anyone mention that (positively or negatively) in any real detail.

The other big selling point of the Polymega are the promised swappable modules that will allow the gamer to play a variety of retro consoles with a variety of formats, including cartridges.

As of now, I have only ever seen Youtubers like MetalJesusRocks and ModernVintageGamer demoing the base model that plays original PlayStation, Saturn, Sega CD, Neo-Geo, and TurboGrafx-CD.

Just as a personal note, I’ve never met anyone who owned a TurboGrafx-CD or even regularly talked about it.

So Where’s the Controversy?

Let’s get the undeniable out of the way; the Polymega has been subject to numerous delays since it’s initial announcement. This includes missing the most recent release date of July 2020. Despite pre-orders for the device being up since last year. Currently, they are hoping for a release in November and cited the pandemic for affecting their supply chain.

There are also several things some retro gamers are concerned about. The major complaint being voiced online is that the system uses software based emulation rather than FPGA (a form of chip-based hardware emulation). I heard one forum member argue that the Polymega was “not what was first promised.”

I’m unsure of the accuracy of such a claim, as Polymega has stated that they only ever intended FPGA to be used in “cartridge” emulation, meaning the NES and SNES. They also admitted as early as 2017 that it could be “some years before we see an FPGA SNES or PlayStation running.”

But many detractors have seized on this supposed backpedaling as a retreat from proper chip-based emulation, with some even labeling the project “dead in the water.”

Polymega’s reputation is especially sour in the vocal and dedicated Sega Saturn communities. The Sega Saturn is notoriously hard to get right on software emulation, so an FPGA-based system would have been awesome.

Related: How To Play Panzer Dragoon Saga for Cheap in 2020

Considering how difficult Saturn emulation is, a skeptical person might believe the Polymega team intentionally used footage of the arcade version of “Sega Rally” because their Saturn emulation wasn’t ready yet.

For their part, Playmaji’s CEO and co-founder Bryan Bernal stated “someone that was editing the final cuts used old footage from a shared team drive that was captured for a previously recorded internal video” and apologized for the error. Whether you believe that is up to you.

All of this isn’t to say that there aren’t folks who are excited for the Polymega. One forum user was incredibly excited to have an HDMI compatible retro console that can hold all of their favorite Sega Saturn and Neo-Geo games. The plug and play nature of the console also appeals to those who want an easy way to bring their extensive (and expensive) Saturn, Sega CD, or Neo Geo library with them while traveling or visiting friends.

The amount of confusion, exaggeration, and miscommunication surrounding the Polymega is incredibly overblown. Many people are furiously against this product, despite never once having any intention of owning it. I’ve even come across someone who accused the Polymega of being “vaporware” despite many youtubers in the community receiving actual physical test consoles and showing them running.

I find it hard to understand why members of the retro community take offense to a device that is not marketed towards them. Many comments I’ve seen during discussions have expressed the opinion that anyone interested in the Polymega is foolish, ignorant, gullible, or straight up stupid.

With all that being said, some of the criticisms leveled at Polymega are valid. Saturn emulation on this machine is an upgraded version of Mednafen, a free emulator available online, so it isn’t anything special. The price tag is another issue — the machine is pre-ordering for around $399, which is a hard pill to swallow during a global recession.

Ultimately, the decision to purchase this device comes down to what the individual gamer wants. If playing on an original console doesn’t matter, $400 isn’t a deal breaker, and your goal is HDMI output, then the Polymega might be for you. But if you’re a purist like me, who demands original hardware, then this device simply isn’t for you.

One thought on “What’s the Controversy With Polymega?”