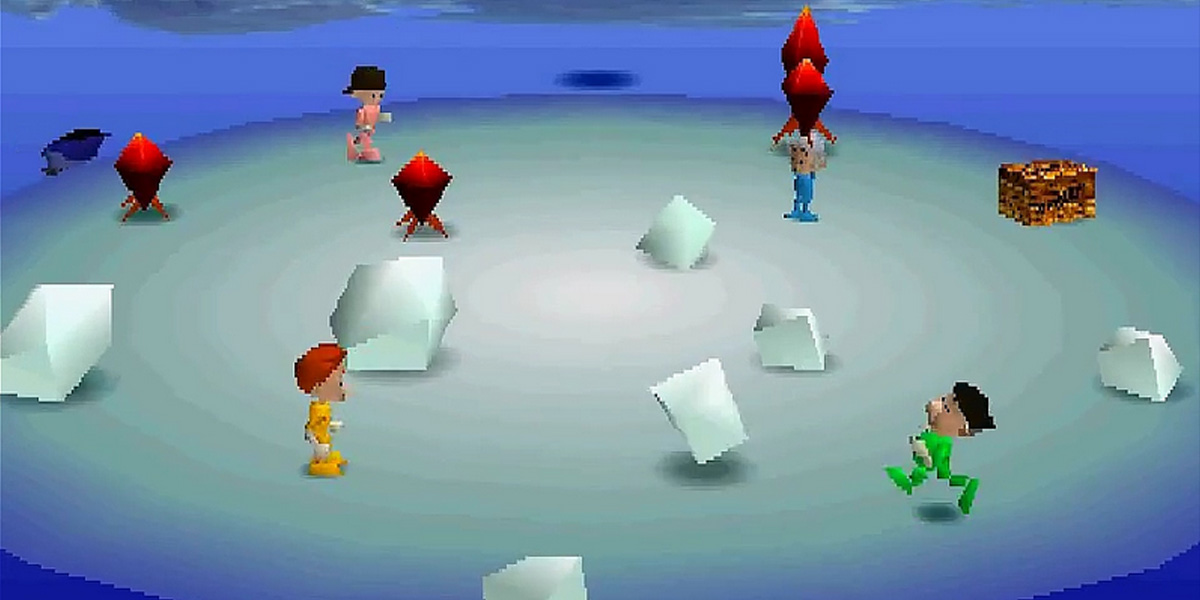 Poy Poy is a great party game for the PlayStation (PS1), and it’s worth a revisit, especially if you have some friends to play with.

The concept of Poy Poy is simple. You’re in an arena with three other players, and your goal is to eliminate your opponents and/or survive until the time runs out.

Unlike popular party games like Mario Party, Poy Poy is a fast-paced game. You can move freely, jump, and pick up objects to hurl at your opponents. In fact, hurling objects at your opponents is the main way to damage opponents.

There are also hazards in the environment, like aggressive moai statues, penguins, an angry robot, and a giant dinosaur made out of rock.

Related: How To Play Nes Tetris Like a Pro

The main single-player experience is the Poy Poy Cup, where you slowly earn prize money for winning matches. With prize money, you can buy new “gloves” which gives you fancy new ways to hurl objects at your opponents. This game mode gives off a Japanese game show vibe.

The characters aren’t exactly memorable, but you can unlock a few fun secret characters in single-player mode.

Of course, the best part of this game isn’t the single-player experience. It’s a party game, after all!

This game is best enjoyed when you’re playing with a group of friends. The matches end quickly and the game’s mechanics are easy to learn. Unlike party games like Mario Party, you’re not tied to a match for hours.

The gameplay holds up well, but the graphics are a different story. After all, the game was released in 1997, and the visuals are extremely dated. But if you’re a fan of late 90s 3D polygons, you might actually fall in love with the graphics.

When this game was released, the reviews were mostly positive. It was praised for its fun multiplayer experience. And since Mario Party wouldn’t be released until 1998, there weren’t a lot of stand-out multiplayer party games for comparison. Bomberman might be the most appropriate comparison for the time.

If you want to play the game today, you’re going to have to buy a PlayStation because it was never re-released in the United States or Europe. It did make its way to Japan’s PlayStation Network though.

If you have friends that are brave enough to try forgotten multiplayer games, you should definitely whip out your PlayStation and a copy of Poy Poy.