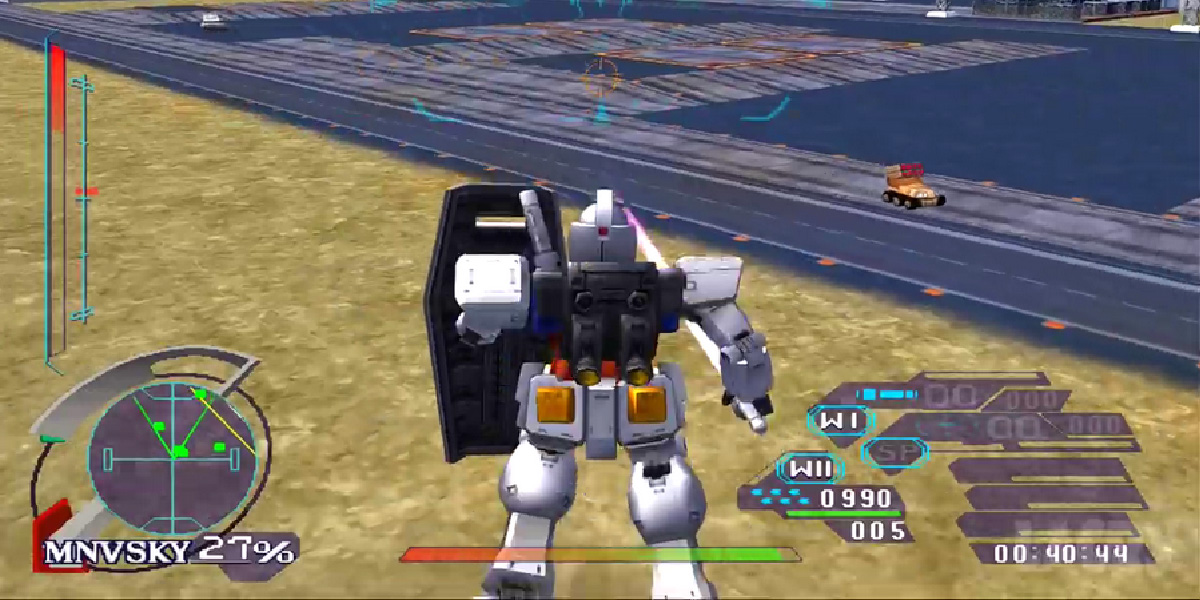 Mobile Suit Gundam: Journey to Jaburo is an action game for the PlayStation 2 released in 2001 that isn’t often talked about in retro circles, but it will surprise and entertain you— if you let it.

The game consists of a 9 mission Story Mode (where you pilot the titular Gundam through the first 1/3rd of the TV series) and an unlockable Tactics Mode, featuring 5 extra missions you can play as a nameless soldier on either side of the conflict.

As a kid, the tactics mode provided hours of entertainment as I constantly replayed each scenario to unlock extra mobile suits and animated cutscenes.

Contemporary reviews criticized the 3D graphics, but for an early PS2 title I think they’re rather good. Sure, they’re not going to wow you. But they’ve held up better than some of the console’s other 2001 titles (I’m looking at you, GTA3).

Journey to Jaburo also took advantage of the PS2’s DVD format to include a sizable number of hand drawn scenes that looked better than the TV show.

The controls are admittedly clunky, but in a way that accurately conveys the feeling of piloting a three story tall robot. You may be frustrated at first, but you’ll get the hang of it once you master the lock-on and strafe techniques.

After all, If 10-year-old-me didn’t rage quit, I’m sure you’ll master it. A good comparison can be made between Journey to Jaburo’s controls and some of the PS2 entries into the Armored Core series.

Journey to Jaburo is not a difficult game, offers a lot of fan-service for those who love the Gundam universe, and can be enjoyed in either short bursts or long play-sessions. But, if Mobile Suit Gundam or mech games aren’t your bag, you might want to pass this one up. Either way, Journey to Jaburo is an affordable PS2 title, even in 2020, so it won’t hurt your wallet to add it to your shelf.