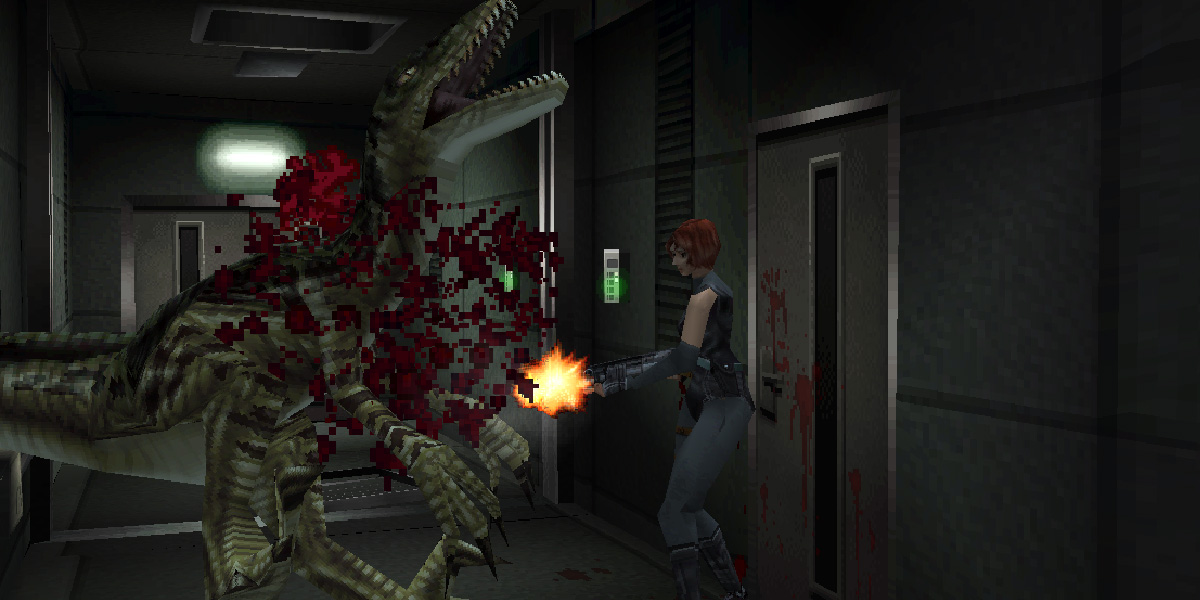 Dino Crisis is a Capcom survival-horror game for the PlayStation released in 1999. I completed the game on my PS3 at 1080p on a modern flatscreen TV with a playtime of just a quarter shy of 9 hours.

I did not play this game at any length as a kid, and this was my first complete playthrough, because of this I was able to look at it in a more objective way without the haze of nostalgia. Almost every contemporary review I read for Dino Crisis compared and contrasted the game with the Resident Evil series.

Dino Crisis is not going to wow you with plot and character development. The plot, while cool and suitable to move the action along, isn’t too original: a time dilation experiment causes dinosaurs to be transported to the modern day. Capcom is retreading comfortable territory here. There’s bio-weapons, underground labs, shadowy governments, and amoral scientists concerned only with their own egos. The protagonist, Regina, makes a pretty cool 90’s heroine. She’s from a paramilitary organization that deals with top secret missions. She’s got a cool bodysuit and a flashy haircut and she seems unfazed by the FUBAR situation at hand.

One strange aspect of the game is that instead of referring to a country, the characters just say “your nation” as if the writers were worried America or Japan would take offense to being included in this fictional dinosaur conspiracy.

A particularly interesting point to note is the choices and multiple endings that Dino Crisis offers. There are points of the game where you are given a choice between two different options to accomplish your mission. From my understanding of the 90’s text FAQs I read, these options don’t matter until the final option, which determines the ending that you get. There was not enough difference in the endings for me to replay the game to achieve them though.

Dino Crisis follows a lot of the typical survival horror tropes. You need to conserve ammo, you need to worry about your character’s condition, and you need to manage your inventory space. You’ll need to collect keys and key items to progress. If you’re familiar with the genre, you should feel right at home.

My standard for puzzles in a game is whether the average 14 year old could competently solve them without the internet or a guide book. Dino Crisis absolutely fails that standard. Most puzzles are straightforward enough; find the data disc and corresponding numerically-coded key disc to unlock the door, or match the color-coded pipes so the energy flows. But others are absolutely absurd. There is a particular item that you use twice in the game to solve a puzzle that involves finding an ID card and a fingerprint scanner, taking fingerprints from a dead body, finding a memo that contains the dead employee’s ID code, then rewriting the ID card using the fingerprint and the ID code. I had to use a FAQ to figure this out. I have no doubt 14 year old me would have just put the game down at this point.

The controls are the standard tank controls of the era. If you’re a Resident Evil veteran this will come as no surprise. There is a lack of Dualshock support, which is disappointing and surprising. One has to wonder if this was a conscious choice by Capcom, as we know the game had been in development since ‘95 and that development was temporarily halted to increase efforts on Resident Evil 2. RE2 got a dual shock re-release before Dino Crisis even hit store shelves, so it seems like DS support could have easily been added.

The atmosphere was convincing and engrossing and the dinosaur AI was a serious add to the terror. I was shocked the first time one of the velociraptors followed me through a door into the adjacent room.

There’s also a bleeding feature, which requires you to use a hemostat when you’ve taken damage to stop your bleeding. Otherwise you’ll continue to take minor damage, and Regina will trail blood behind her.

Dino Crisis is a good looking game for 1999. It’s fully 3D environment looks impressive, even with the texture warping that nearly every PS1 game suffers. Fully 3D environments is something Capcom didn’t do with Resident Evil until Code Veronica on the next generation consoles.

The dark, sterile, laboratory environment really helped sell the terror and immersion of the game. Lighting was used to great effect. While the whole thing takes place in the same facility, we get a surprising variety in the look and feel of the locations, from the bloodied main facility, to the collapsing underground tunnels and relatively intact testing facility. We even get some wide-open outdoor areas.

Sound design is a mixed bag. When you’re playing the game, it works. You hear the thud thud of the dinosaurs around the corner before you see them, which adds nicely to the tension. During cutscenes, the sound design is atrocious. Quality control really should have spent some more time on sound mixing. You can hear some dialogue fine, but others are just so low in the mix that, even after adjusting the sound options, I miss entire conversations. Mercifully, Dino Crisis is pretty thin on plot— so you’re not missing much.

Dino Crisis was an enjoyable enough game to play through. To me, this game has held up well graphically, but not so much in the gameplay department. Contemporary reviews at the time gave it great ratings, except for Game Revolution, which flatly stated “…you shouldn’t buy Dino Crisis either, because it’s just not very good.” Wow, harsh.

I would recommend playing with a guide. Figure out the puzzles to the best of your ability and when you find yourself at a loss for what to do, consult the guide. This will allow you to enjoy solving the reasonable puzzles yourself, without driving you nuts with the more ridiculous aspects of the game.

If you’re a Survival Horror Fan, a Capcom fanboy, a puzzle solver, or a speedrunner, Dino Crisis may be right up your alley. If not, you may want to pass this one up.