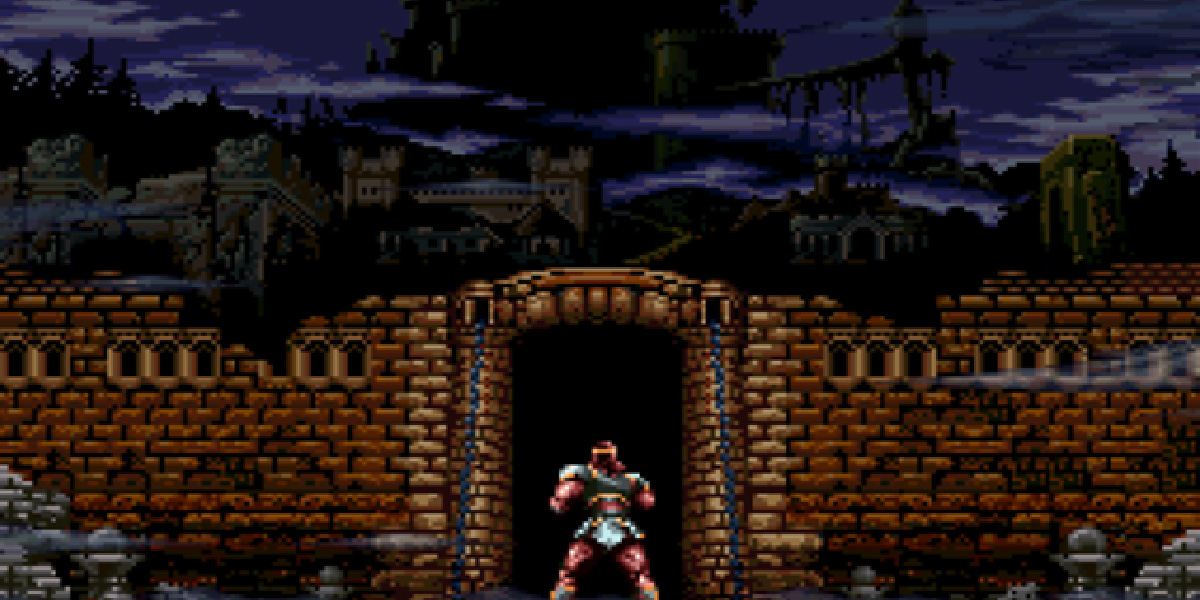 If you haven’t played Super Castlevania IV, you’re probably at least familiar with it — the game has been re-released multiple times since its original release in 1991.

Instead of being a direct sequel to the NES games, the SNES game follows more or less the same story as the original Castlevania — vampire hunter Simon Belmont must defeat Dracula again.

But you don’t play these early Castlevania titles for the story, especially when it comes to a game like Super Castlevania IV, which has a lot more going for it in the visual and gameplay department.

As soon as you start up the game, you get an impressive view of the road ahead of you with a menacing silhouette of Dracula’s mansion in the distance. That opening screen sets the tone for the entire game.

The levels are extremely detailed with their own themes. And the enemies often match the themed level. For example, level 6 is the main hallway of Dracula’s haunted mansion and Simon Belmont is faced with an onslaught of ghostly butlers and ballroom dancers.

Super Castlevania IV made the most out of the Super Nintendo’s graphical capabilities, even utilizing Mode-7 graphics to turn entire rooms, which is heavily utilized in level 4.

A lot of effort went into the overall look of the game’s levels, but there was just as much effort put into the layout and level design.

There is a lot of platforming in this game, but the jumps always feel fair. The game teaches you early on that some platforms break and some platforms will flip if you jump on them. You have the first few levels to get acclimated before the difficulty gradually slopes up.

Most of the game’s early enemies are pretty straight forward and easy to take out with Simon Belmont’s whip. As the game progresses, you’ll face more enemies with patterns that you’ll need to learn.

The flying enemies can be frustrating once you reach the mid-game, and you will probably get knocked off some platforms. You just need to be patient to learn their movement patterns.

It’s incredibly satisfying whipping the enemies — you really feel like you have control over the whip because you can whip diagonally. You can also use your whip to grab onto rings for even more platforming action.

The whip is sufficient for most enemies, but you can also pick up sub-weapons like a throwing axe and a cross that acts like a boomerang. But some of the sub-weapons are pretty useless, like the holy water that puts a small fire in front of the player.

Overall, Super Castlevania IV is one of the best games in its genre. It has everything you’d want in a game — a beautiful style, great levels design, and satisfying gameplay.