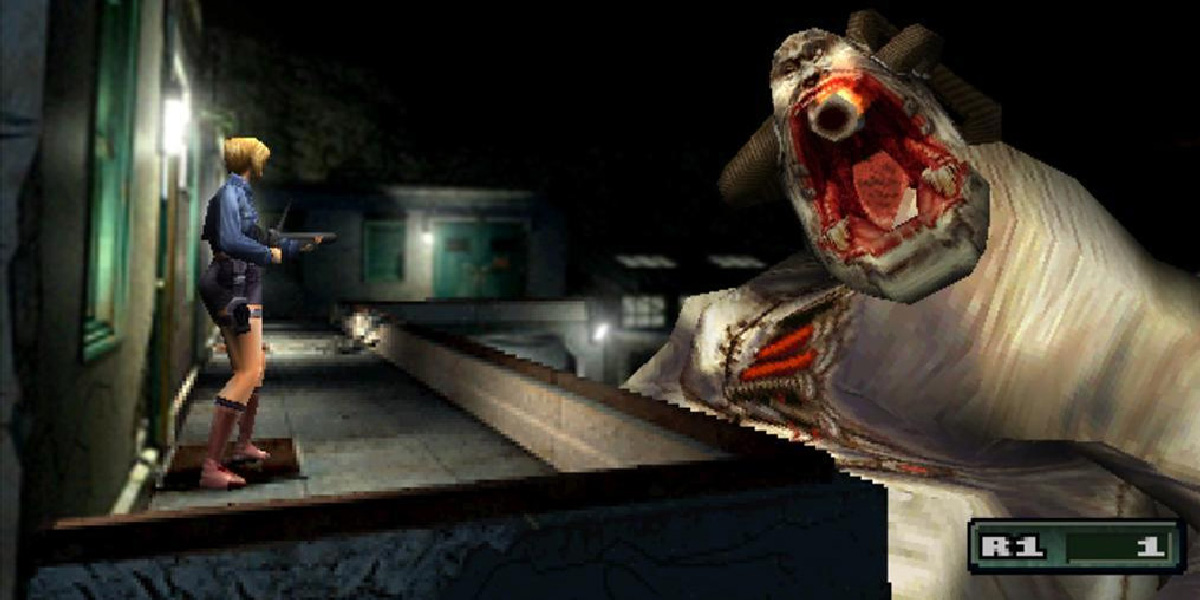 Parasite Eve II is a survival horror action game developed by SquareSoft and released in 2000 on the PlayStation. A sequel to 1998’s Parasite Eve, Parasite Eve II attempts to improve on all aspects of the original, but it doesn’t quite get there. I played this game on my PS3 on a modern flat screen TV at 1080p. My total play time was around 10 hours. I did not complete the game.

We’re re-introduced to Aya Brea 3 years after the events of the first game. She’s now part of the FBI (cool) but still taking orders from superiors (weird). Aya is tasked with investigating a re-appearance of creatures similar to the ones she fought in New York. The plot develops over the course of a few days and several locations; a LA skyscraper, a desert town, an underground shelter/laboratory, and a Jurassic Park style underground oasis.

I enjoyed how the plot was revealed to the player, gradually and then all at once. Unfortunately, when the conspiracy is all laid out, it’s not too original. The final reveal is oddly akin to the last couple episodes of the anime Neon Genesis Evangelion. The game’s shadowy organization, Neo Ark, believes humanity is an “evolutionary dead end” and must harness the power of Mitochondria to quickly evolve past this dead end. This shocking reveal is all brought to you by some double and even triple crossing.

The compelling plot was the only thing propelling me to continue playing through this game. Had I not desired to see the story’s end, I would have put this down after disc 1.

This game was frustrating. That’s the kindest way to put it. The controls are not intuitive, but eventually you get a handle on how to select enemies, fire, and win fights. Often this will involve Aya shooting at enemies off screen with only a small damage counter to let you know if you’re actually hitting anything.

But seriously, this game was absurdly frustrating. I’m talking grit my teeth, growling at the screen, frustrating. There are multiple parts in the game where you are besieged by enemies that can stagger Aya, one by one, leading to a sort of stun-lock death spiral. Other times you’re simply overwhelmed due to powerful enemies and lack of space. Ultimately though, it was the game’s difficulty that made me call it quits. The penultimate boss has a powerful attack that instant-kills Aya unless players correctly maneuver her with almost no room for error.

In a game with tank controls, there should never be a boss fight that requires you to deftly control your character to avoid a sudden death. It makes me wonder if they even play tested that far into the game, as the cheapness of the enemies ratchet up in the final act.

I watched someone on YouTube beat the final bosses, and even though I followed a guide to get to that point, I had no clue how they had been able to level up their spells and acquire the weapons they did on their first playthrough that allowed them to stand still and tank the bosses.

Another serious negative to the game: the puzzles. As I’ve stated in previous reviews, if a 14 year old can’t figure out the solution without a guide then it’s not a fair puzzle. PE2’s puzzles are ridiculous. I mean, one requires you to math out how old Wyatt Earp was when the famous Gunfight at the O.K Corral happened. Another requires either remembering a throwaway line or having a knowledge of Japanese culture. The Parasite Eve wiki even speculates that “[it is] almost as if the developers designed the game in order to sell strategy guides.”

A few things I did like about the game: Aya is provided with maps that labeled which individual cells would contain enemies. This allows you to plan your routes to the next objective and prepare better. Additionally, enemy designs were pretty varied, with each new area guaranteed to introduce a new foe.

Graphically, Parasite Eve II an improvement over the first game. Character and enemy models are more detailed, but the pre-rendered backgrounds have predictably not aged well.

The FMV sequences look great though. Aya looks like an actual human now, albeit still an anime-human. I especially love the last couple FMVs near the end of the game where the military wipes out the cyborgs and saves Aya at the last minute and the orbital space weapon obliterates the desert town.

Soundwise, Parasite Eve II is a downgrade. Some motifs from the first game return here and there, but the majority of the in-game music is eerie buzzing, humming, or rumbling, unlike the original’s Final Fantasy-esque soundtrack. There is minimal voice acting, which is an improvement from no voice acting in the original, but still a disappointment. For contrast, Square’s 1998 release, Brave Fencer Musashi, is fully voice acted. As Parasite Eve II is a two disc game, it’s not like space was a concern.

Despite the interesting story, I would not recommend you play Parasite Eve II, even if you really enjoyed the first one. Ultimately, Parasite Eve II does not respect your time. I played up to the final bosses and watched the “True” ending (which i’d completed the requirements for) on YouTube. That satisfied me. Parasite Eve II, I’m not mad, I’m just disappointed. With all that being said, I’m working on acquiring a copy of The 3rd Birthday.

One thought on “A Look Back at Parasite Eve II (PS1)”