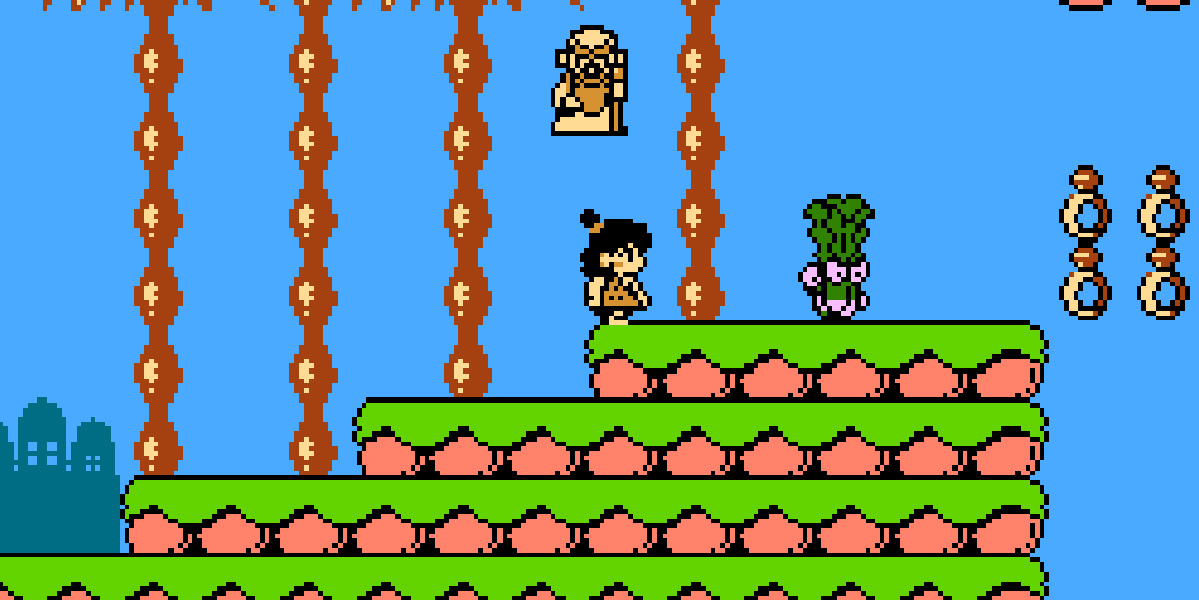 Y’all remember Banana Prince right? The European exclusive NES game that’s all in German? Of course you do!

In 1993, Nintendo released the NES Model 2 also known as the “top loader” or the “New-Style NES.” Because the cartridges load on the top instead of the front toaster tray, the games have a much higher chance of working on the first or even third time you try.

Why am I mentioning the top loader? Well, another great thing about it is that you can play European-only NES cartridges on it! These otherwise region locked games don’t load on the original NES, which is a shame since there’s a ton of really good titles we missed out on in America like Parasol Stars, Konami Hyper Soccer, New Ghostbusters 2, Ufouria, and so on. There’s a bunch and almost all of them are top 100 material. Maybe I’ll get to some of those soon, but for now… Banana Prince!

So the story of Banana Prince is… I have no idea because it’s all in German. I wouldn’t normally recommend a game in another language than English, but you really don’t need to know what anyone is saying in Banana Prince for the most part.

Since I don’t know the plot, I’ll make one up: You play as Splits McPrince, a no-good nose candy aficionado and son of Peels McPrince, the Banana King of Brazil. Dad wants you to get a job at the banana stand (where there’s always money), but Splits goes all “no dad, I don’t want your life” before donning casual leopard toga gear and heading out to the jungle in search of ayahuasca. It’s here that he reconnects with his people’s roots, smokes tons of DMT, unpeels the outer layers of his pretentious bourgeois lifestyle, and finally sheds his human form to become one with the fruit and the destiny he was trying to avoid. To become… THE BANANA PRINCE!!!

At first, Banana Prince appears to be a typical platformer — you jump, swing your sword at enemies, and run to the right as the screen scrolls. Eventually, you get to this huge chasm with a sign written in German that looks like “Uptern B Taste.” Oh whatever dude, I’m American, save your foreign word warnings for the UN, sucka! I’ll just freedom jump the chasm annnnndddd… nope, didn’t make it.

Well, I looked it up and pressing down + B plants a vine that sends Banana Boy to the top of the screen allowing you to jump even further. Neat! Germany rules!

Down + A will make you slide on your stomach penguin-style, which is pretty rad and adorable. The only downside is that the slide isn’t very useful and will most likely accidentally kill you. You’ll often find yourself next to a huge gap and thus needing the vine, but it’s easy to hit A instead of B, which causes you to slip and slide your jungle ass straight into the abyss.

There’s a few bonus games between, after, and hidden in the levels. But honestly, the bonus games are all written in German so I have no idea what’s going on. The casino has you rolling dice, but I’m not sure what causes the player to win or lose. There’s one door labeled “Adieu” that leads to a little girl who gives you a kiss. I don’t know what good that did, but thanks little lady! The last door is this H.R. Pufnstuf reject who sells you upgrades that will give your sword projectiles. So far so good!

The door marked “Sprung” takes you to an overhead map similar to Super Mario Bros 3. Here, you roll the dice like a board game and try out a bunch of additional bonus games like scratch-offs. You will also find a completely impossible part of this game if you can’t read the language: multiple choice trivia questions. You’re gonna need a walkthrough for these and even if you knew German you might find the answers difficult to come by as they’re basically Trivial Pursuit Junior level hard. Whew, I didn’t know I’d be doing so much schoolwork in my video gaming!

The stage layout of Banana Prince is presented on a world map similar to games like Adventure Island, a title that Banana Prince clearly drew a lot of influence from. There’s three stages to each world followed by a boss fight. The bosses are all disgruntled fruits or vegetables, and they are amazing. The second world boss is this punk rock radish that splits into five pieces and then reconstitutes around you as it’s attack. I’ve never seen an NES enemy do that — way cool! The bosses are my favorite part of this game and actually require a decent amount of strategy, vine usage, and pattern recognition to beat.

Banana Prince has all the makings of a solid late NES release: great sprites and background, catchy intricate music, lots of extra features. However, I would also say that those extra features are its greatest fault. You have so many opportunities to do the bonuses that they become more cumbersome than fun and I find myself declining them more often than not.

Also, since games back then had limited memory, I have to believe that most of the programming space went into these distractions and not into the level designs themselves because the stages are especially short. If you avoid all the doors, you can beat some of the levels in SECONDS.

As such, the other flaw is that aside from the grueling trivia levels, Banana Prince is way too easy. Not only is most of the action skippable thanks to the vine or the slide, but you get extra health and lives constantly. This coupled with infinite continues (that start you exactly where you died) make Banana Prince a breeze to beat your first time playing.

Would I recommend Banana Prince? Most definitely. It’s as fun as other “the Super Nintendo was already out” NES titles like Panic Restaurant and Bonk’s Adventure. However, I would not suggest trying to import Banana Prince like I did because it’s pretty pricey and translating the German is more trouble than it’s worth. Surely there’s an English translation ROM out there waiting for all of you cool emulators out there. Check it out!