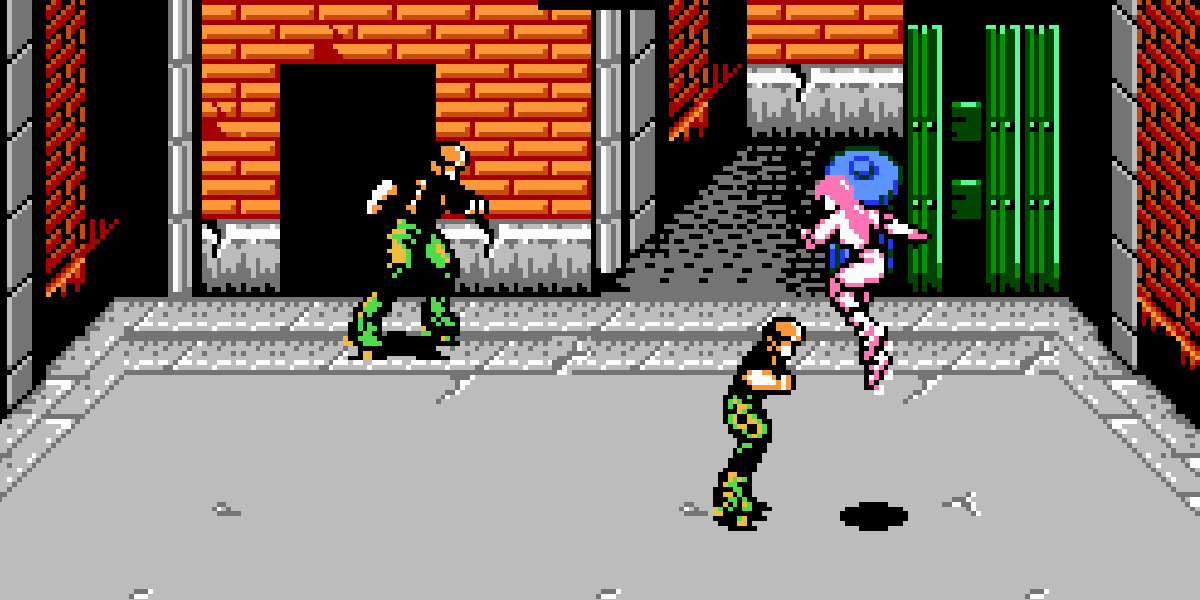 Man, there is so much I didn’t know about Rollergames for the NES. I’ve got a complete set of games and at a certain point I was picking up 10-20 titles a week, most of which I never played, just filed away alphabetically on my shelves. There are three NES games that start with “roller” and I assumed for the longest time that Rollergames was just another 8-bit pinball game like Roller Ball, High Speed, or Rock N’ Ball.

Well first of all, Rollergames is not a pinball game. It’s an obstacle racer/beat-em up made by Konami under the Ultra label. Damn, I wish I’d noticed that earlier! Also, Rollergames is based on a 1980s roller derby television show of the same name that I never knew existed, but so desperately wish I had known about as a kid. If you’ve been to a roller derby event before, the Rollergames show was basically that (people on roller skates competing on a track) coupled with scripted over-the-top antics similar to that seen on WWF or GLOW.

The story is oddly very closely based on the TV show, but embellished and expanded beyond a simple arena. Basically, the three evil teams have kidnapped the owners and the three good teams have to go rescue him. That’s actually how the game refers to them, which is great because I didn’t want to get confused about who were the bad guys. So you and your wholesome squad have to leave the roller rink and head out onto the streets to bust some heads and scoot across some pavement!

You can choose one of three teams, but you don’t really know what character you’ll control until the game starts, which is confusing at first. There’s “Icebox” for the T-birds, “Sly Fox” for the Hot Flash, and “The California Kid Mike Flannigan” for the Rockers who I assumed from the sprite was a sexy lady in leopard print tights and now I’m confused. They seem to have slightly different moves and stats but I can’t really tell much difference honestly. I will say, whether it’s because he actually controls like a slow shopping cart or I’m just fat shaming this dude, the portly “Icebox” is not my favorite.

The gameplay is divided into two types: either you’re moving around a screen and avoiding obstacles while skate punching enemies, which is absolutely as gratifying as it sounds, or you’re on a static screen in more of a beat-em up style scenario like Double Dragon.

You only have two buttons (jump and punch), but in the fighting sections of the game you can also grab the enemies and knee them in the face before throwing them. You’ve also got a kind of jump kick/punch that’s… not so effective.

There’s a great balance in gameplay that’s part level memorization coupled with old school hit and flee style brawling. The game controls really well and even in the isometric-esque sections you can still navigate the dangers with ease. While beat-em ups are often tough or boring with a two button controller, the action here is still pretty satisfying even in its simplicity.

Rollergames is for sure classic Konami. There really isn’t a single game they made for the NES that’s a stinker and I’m including stuff like Metal Gear and Adventures of Bayou Billy in that list. Even their worst titles are better than 90% of the NES library.

In appearance, Rollergames most reminds me of Rush N’ Attack or Monster in My Pocket, while the music and sound effects reminds me of Zen the Intergalactic Ninja or any of the Ninja Turtles games. Considering it came out in 1990, I’d say it’s one of the most impressive overall presentations on the system.

In terms of difficulty, Rollergames is pretty tough to say the least. The screen moves pretty quick in a lot of stages and some of these obstacles are impossible, IMPOSSIBLE, to avoid. Like most titles at the time, dying takes you back to the very beginning of the stage no matter how far you’ve progressed, so get used to running the same sections over and over and over again.

It’s one of those games that your friend probably spent every weekend playing repeatedly and even 20 years later can flawlessly run through it without dying. However, if you’re picking it up today for the first time get ready for some frustration. Luckily there’s infinite continues so at least it’s not one of those “three strikes and it’s game over” titles.

Would I recommend Rollergames? Absolutely. It’s such a silly concept, but in the hands of Konami it becomes this action packed feast for the eyes and ears that’s both challenging and fun. Check it out!