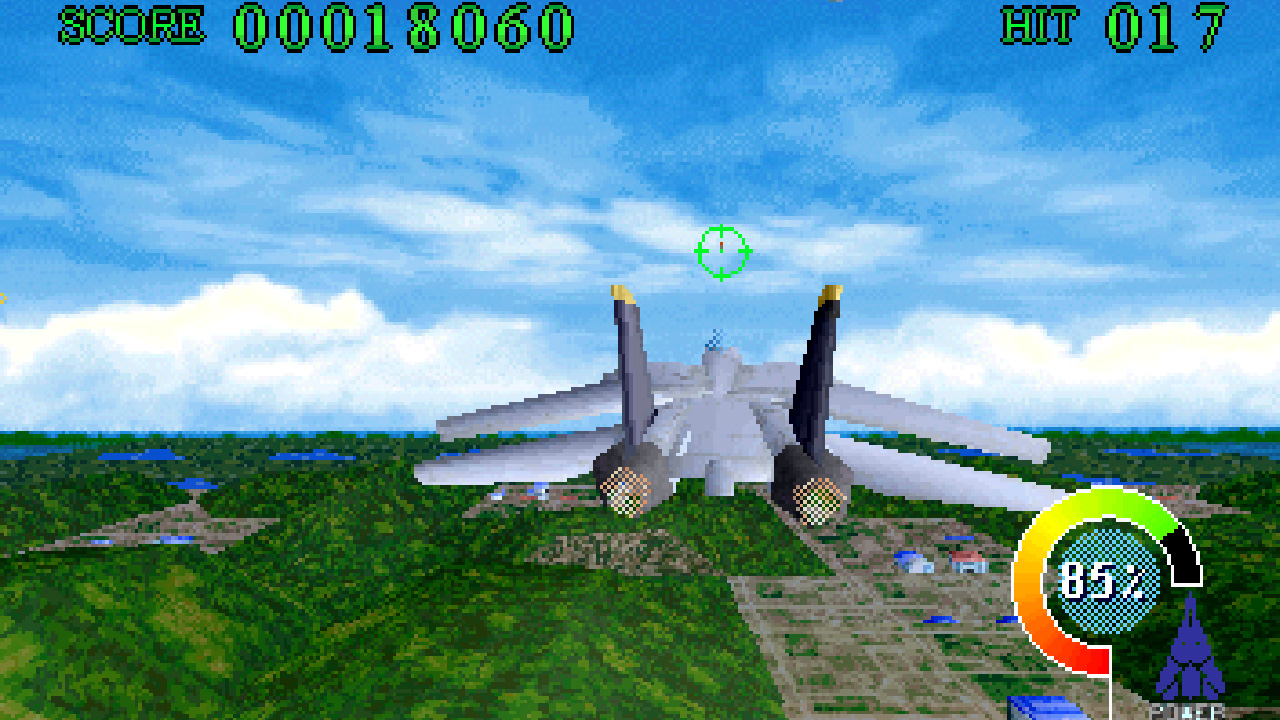 Sky Target is an on-rails shooter for the Sega Saturn that I don’t see mentioned a lot. Originally a 1995 arcade game for Sega’s Model 2 arcade board, Sky Target was ported to the Saturn in 1997 by third-party developer Appaloosa Interactive.

I believe I played Sky Target as a kid. I have this sliver of memory in my head, like a few frames from an old movie. In this memory I’m playing a game with a joystick and a faux-cockpit at a Chuck E Cheese by the local mall. I’m almost positive that arcade cabinet was Sky Target. So when I saw Metal Jesus run some footage of Sky Target recently, something was unlocked in my brain and I knew I had to give this rail shooter a go.

And admittedly, the Saturn version of Sky Target is not the arcade perfect port advertised on the back of the game. It does feature the Arcade mode, a level-select Ranking mode, and your standard options menu though.

Arcade mode is exactly how it sounds, a straight shot through the stages with a certain number of continues. The routes diverge at points, which is always nice to see in a rail shooter, and adds replayability.

The ranking mode is essentially a level-select feature with end-of-stage scoring. You’re awarded a score out of five stars at the end of each stage. The total tally of all stars awarded gives you your rank. This adds. . . something to grind for— but, with no actual unlockables, a fake military rank isn’t much incentive to keep returning to Sky Target.

Players get to choose between four planes, an F16, an F-15 SMTD (a modified F-15 prototype), an F14D Tomcat  and the Rafale, I usually stick to the F14D, since the Tomcat is an iconic aircraft. But it doesn’t matter, as far as I’m able to tell every plane operates exactly the same.

Sky Target’s controls are painfully simple: The D pad flies your aircraft around the screen, the A button fires the machine gun, and the B and C buttons (as well as the shoulder buttons) fire missles.

Gameplay is equally easy to pick up; players progress through the stage targeting enemies and firing missiles all while avoiding incoming fire and enemy missiles. Each stage has a boss battle against some sort of huge-mega-aircraft, these are usually pretty simple. When these boss battles end there’s often an extended explosion sequence which usually involves an insane amount of clipping and awkward camera work that simply does nothing to make the Saturn look like the competent 3D machine it is.

Even during normal gameplay Sky Target isn’t the best looking. The game is an obvious step down from the arcade. The frame rate is slowed, pop-in is wild, and there’s just a layer of Saturn jankiness that Appaloosa Interactive didn’t polish out. I’m no designer, so I don’t know enough to say the port was challenging or if Appaloosa Interactive just did a bad job, but it is what it is.

Some of the music is cheesy 90s Power-Rangers guitar rock, which I honestly don’t mind and can even get down to. But some of the music is just completely off the rails. Linked below is a tune that plays at the beginning of the first boss fight. Yep, you’ll hear this song every playthrough.

If you were expecting, or hoping for Panzer Dragoon with an Ace Combat skin— this is NOT that game. Rail shooter fans will find some enjoyment here, if just for the novelty of experiencing something new-but-familiar, and Mission Stick owners may be able to replicate an arcade-like experience—but those looking for something deep or unique on their Saturn should look elsewhere.