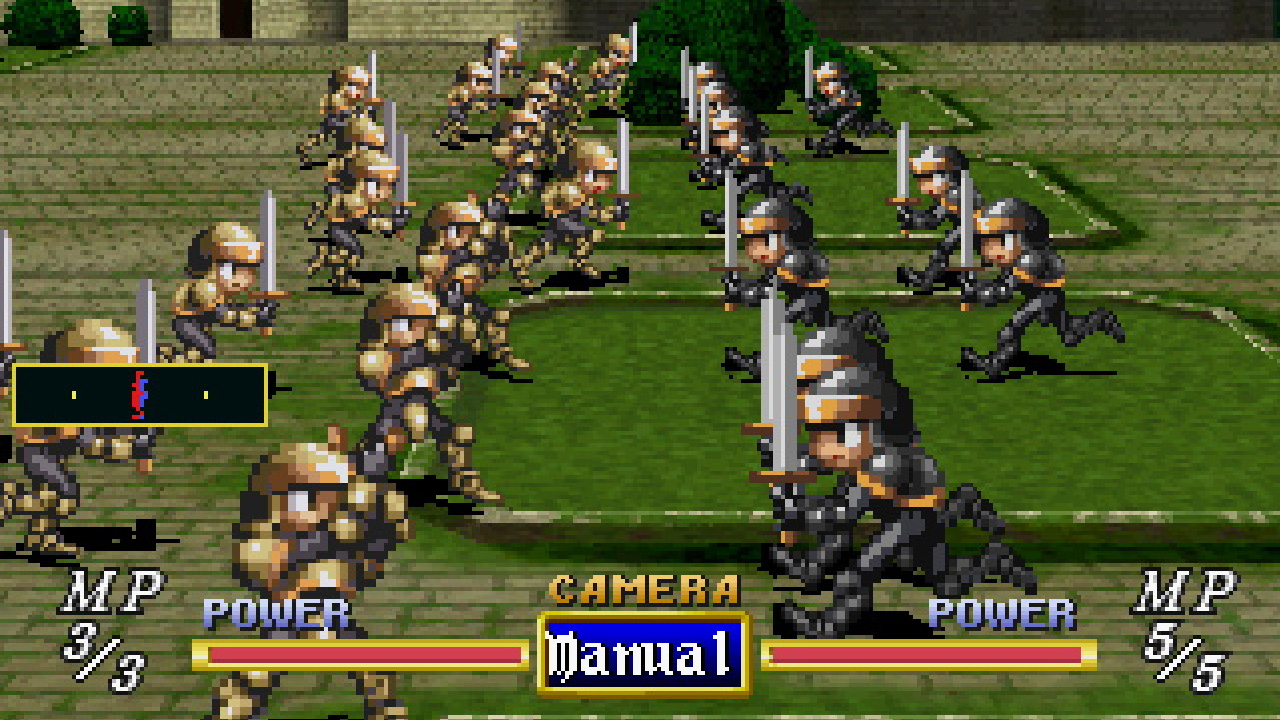 Dragon Force is an epic fantasy real time/turn based strategy game for the Sega Saturn. The player chooses one of eight kingdoms and assumes the role of their leader at the start of the game. Regardless who you choose, the goal is the same— come together to defeat an ancient evil that has once again reared its ugly head. It’s up to whichever leader you choose and the other members of the Dragon Force to defeat the evil Madruk.

Dragon Force has an anime art style which fits the time, and a Working Design’s translation that was probably funny in the 90’s — today, the jokes fall flat. But the atmosphere and backstory comes through. I really felt like a Rob Stark type fighting for the realm! It’s cool and addicting taking castle after castle, uniting the Dragon Force and recruiting enemies to your cause along the way.

Gameplay occurs in three distinct phases during each turn. First, the “governmental affairs” phase, where the player can award medals to their generals, equip items, search or fortify castles, speak with captured generals or even free them to fight for you.

Second, is the movement and conquest phase of the game. This is where Dragon Force is real-time. You position your armies around the world map, making contact with enemy armies or castles to initiate conflicts. In this phase, the player can also replenish each general’s supply of foot soldiers at castles — an important resource to manage.

While this phase is real-time, meaning your armies and other nation’s armies are moving around the world map at the same time, you can pause to take a breath and make selections. In late game this is necessary, as you’ll be fielding several large armies in different directions at once.

The final phase, combat, is initiated any time one of your generals contacts an opposing general or castle. Players have the option of negotiating with the enemy armies, fighting, or fleeing. The actual combat itself is a slightly more involved form of Rock-Paper-Scissors. Certain unit types beat other unit types better, while having a weakness against another unit type. This reminded me of the excellent GBA game Advanced Wars. But, like I said, there’s another layer of strategy; the formation of your units does actually matter, and a smart formation can offset a unit’s weakness enough to turn the tide of battle.

During this combat phase there can be hundreds of sprites on screen, with almost no slowdown. Sure, they’re the same sprite doing the same motion, but the effect is still impressive, even today. I loved watching my army of cavalry bear down on my enemy’s soldiers and tear them apart, or watching my 100 zombie army withstand a concentrated enemy attack.

Dragon Force is a wonderful game, but quite the time investment. I spent a week playing it and I felt like I only scratched the surface. It was confusing at first, but once you understand the flow Dragon Force is a lot of fun. If you love these types of strategy games, there’s a lot to love with Dragon Force — you can replay with eight different player characters, each with their own kingdoms and stories.

Emulate, play a burned disc, or pop the .iso into your ODE, because Dragon Force is another top-dollar Sega Saturn game! But if you’re a collector and do decide to purchase a copy, you won’t be disappointed. The Working Designs team always took special attention and care to packaging.

My parting advice is to repeat what Sega Lord X said about Dragon Force; go in blind, and don’t read any guides. Discover what works and what doesn’t yourself! Have fun!