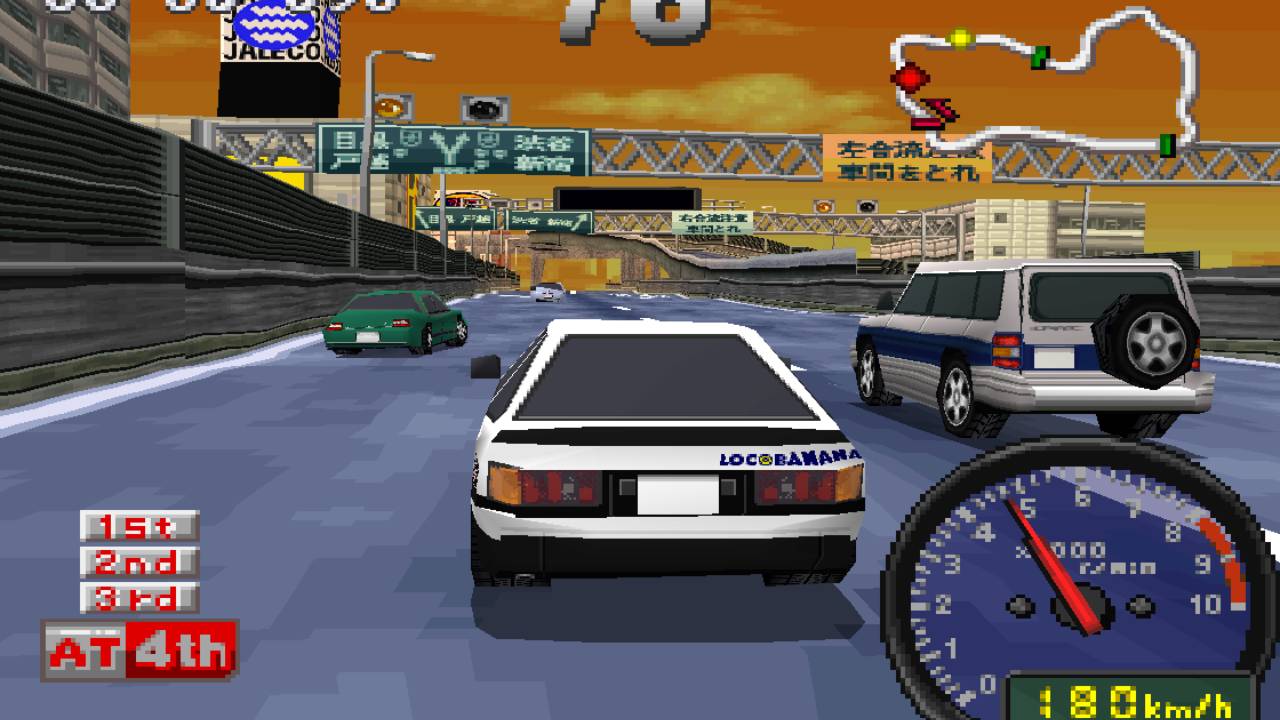 The North American cover art for the game paints quite the picture with a sports car racing toward a bustling Tokyo with neon signs and skyscrapers. In fact, the back cover even mentions “the neon-lit Japanese metropolis.”

Unfortunately, the game’s three courses aren’t actually “neon-lit” as the cover would lead you to believe. That’s not to say there isn’t anything nice to say about Tokyo Highway Battle’s courses. With enough suspension of disbelief, it does actually feel like you’re driving in Tokyo. The courses also go through day-and-night cycles as you drive through them, which is a nice touch that somewhat compensates for the lack of variety.

While the stages do somewhat resemble Tokyo, the game’s graphics are nothing to write home about. I’d consider it middle-of-the-pack when it comes to graphics in PS1 racing games. You definitely won’t see anything on the level of Gran Turismo 2 or R4.

The same can be said about the music. Although Tokyo Highway Battle can be compared to an Initial D game in many aspects, music is not one of them. Again, that’s not to say the music is necessarily bad, but there weren’t any tracks that really stuck with me.

So what about the gameplay? If you’re familiar with the Tokyo Xtreme Racer series, you’ll already know that they have a heavy focus on drifting. That’s definitely the case in this game, but perhaps not as emphasized. The game offers a drift button, and the drifting is actually not too bad. But drifting is not quite as integral to the game as later entries in the series.

You start out with a choice of three cars, but the list expands as you play through the game. Unfortunately, you do play the same three tracks over and over again, but the game keeps it fresh by increasing the difficulty as you upgrade your cars and progress through the game.

The races themselves are one-on-one, which is different from most racing games of the time. If you’re more familiar with traditional racing games, you might think this would get boring, but it doesn’t get as stale as you think. In Scenario mode, the game gives a face and name to your opponents as well as a few lines of text as dialogue. This makes your opponents seem more like your rivals compared to the faceless racers in other PS1 racing games.

Overall, I’d say Tokyo Highway Battle is pretty average. However, it’s the closest thing that Western audiences got to an Initial D game for the PlayStation. But if you manage to find a cheap copy of this game, I’d say it’s worth picking up and trying out.