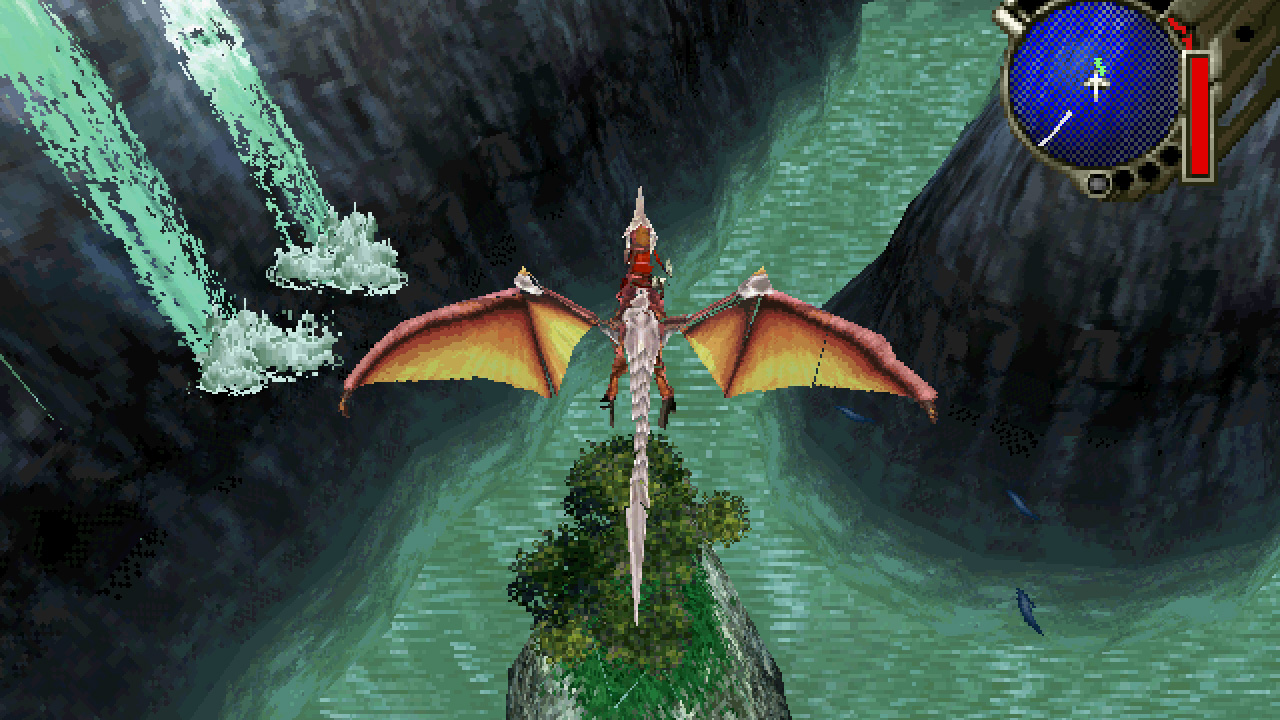 Today, Panzer Dragoon Saga is mainly known for the exorbitant price an NTSC-U copy commands in collector circles. Unfortunately, this has led most discussions around the game to center on its price and the game’s merit vs its cost. This is frustrating because the majority conclusion is that the game is not worth it’s price tag.

To which I say: “no shit.” No video game is worth $1,000 when you’re analyzing the game’s “fun-quotient.” Panzer Dragoon Saga is a roughly 8-12 hour RPG depending on how much extra exploration you want to do.

At the current prices that’s roughly $100 an hour to “experience” the game.

Related: How To Play Panzer Dragoon Saga for Cheap in 2020

Panzer Dragoon Saga is a 4-disc, semi-active, turn-based RPG. Turns are determined by an action meter that fills as each battle progresses.

The game implements a 360-degree movement system that mirrors the rotation of the rider in the previous two Panzer rail shooters. The player can move to 4 areas around an enemy; left, right, in front and behind. This movement concept adds a level of strategy unseen in other RPGs of the era. Moving to avoid vulnerability or reveal an enemy weak spot is a fundamental aspect of the game’s combat system.

Your dragon changes form as you progress, allowing more powerful abilities and allowing you to access new areas. This is a recontextualization of the dragon-evolution mechanic introduced in the previous game, Panzer Dragoon Zwei.

Several of the areas you visit in Saga are directly inspired by the previous games, such as the desert, the excavation site, and the sunken ruins, which mirror levels 2, 3, and 1 of the original Panzer Dragoon, and the forest of Zoah, which mirrors the 3rd level of Panzer Dragoon Zwei.

The character maneuvers in several different ways. There is a world map, where the character is able to visit and revisit sections of the game. There are also on-foot segments, where the player enters villages or other human settlements and interacts with NPCs. Lastly, the majority of the game is explored while seated on the dragon. Control is entirely in a 3D environment.

The game also features a point-and-click adventure style cursor. Objects and people are interacted with by highlighting them with the cursor and pressing. Objects will either display “near” or “far” on the cursor; with near having the character interact with the object and “far” often eliciting the character’s thoughts on the person or thing.

The previous two Panzer Dragoon games painted the world in broad strokes; conditions were harsh in the world thousands of years after the “ancient age.” The previous games introduced the warring nations and of course the dragons, but Saga expands on these plotlines by leaps and bounds.

You play as Edge (or more accurately, “the soul that controls Edge”), who is a mercenary hired to protect an ancient age excavation site. After a mysterious figure is excavated and the site is subsequently attacked, Edge is introduced to the dragon and our Saga begins.

Over the next 4 discs, you meet a variety of characters and travel to diverse locations. Unlike other RPGs of the era, such as Final Fantasy 7, Panzer Dragoon Saga’s story is rarely lauded over and dissected. But it is fairly involved and interesting — and places the previous games in a measurable chronology.

The final few minutes of the game are a real head spinner. I hesitate to reveal this, but there is some meta commentary on the player and the nature of video games at the end.

Some may find it interesting or confusing that a 12-hour RPG spans over 4 discs. While the game world is massive, the discs are mostly due to the FMVs. There’s simply a lot of FMV sequences in this game. Many of them are back to back.

The graphics are impressive for the time. A fully 3D game realized on Sega’s 2D-centered system really is an achievement worth lauding. While it doesn’t look nearly as good as Ocarina of Time, which was released the same year, it serves as a capstone to what could be done on the Sega Saturn when developers had time, ambition, and familiarity with the hardware.

The developers even put transparencies in, which is something that almost every 3rd party developer either struggled with or didn’t bother to implement on the Saturn.

The VDP2 is used to draw expansive landscapes and seascapes, as well as present cloud overlay during certain flight segments or a flame overlay during the Forest of Zoah, which gives the 3D world a unique appearance that is distinct from the usual PS1-era 3D wobbles.

Indoor areas suffer from excessive texture warping, which is unfortunate and shows the limitations of what Sega and Team Andromeda were able to accomplish. But even these moments serve as reminders of how far they came.

The soundtrack to the game is absolutely fantastic and incredibly memorable. Team Andromeda developed Panzer Dragoon Saga at the same time as they developed Zwei, the previous entry. This helped strengthen the connection between the games in a variety of ways, but none is more obvious than the soundtrack. Saga’s soundtrack features a unique combination of synths and programmed drums crossed with “tribal” melodies and rhythms. Musically, this centers the player in the tribal-future/technological-past Panzer world and helps really sell it.

One thing that’s rarely mentioned in regards to the game’s audio is the near-full voice acting in the game. Claiming to be its own language in promotional media, the voice over is Japanese with some Latin, per my ear. Still, this is impressive for the time.

When one compares Panzer Dragoon Saga to the party-style RPGS that had become popular in the 32-bit era, it’s easier to see why this game holds significance for so many. The game broke the RPG mold present at the time, with so many 32-bit RPGs featuring turn-based sprite fighting with pre-rendered backgrounds.

Panzer Dragoon Saga is certainly a must-play for any fan of RPGs, the Sega Saturn, or retro gaming milestones in general. It’s one of the reasons I believe 1998 was the best year for video games. But, please, don’t shell out an arm and a leg to play it.