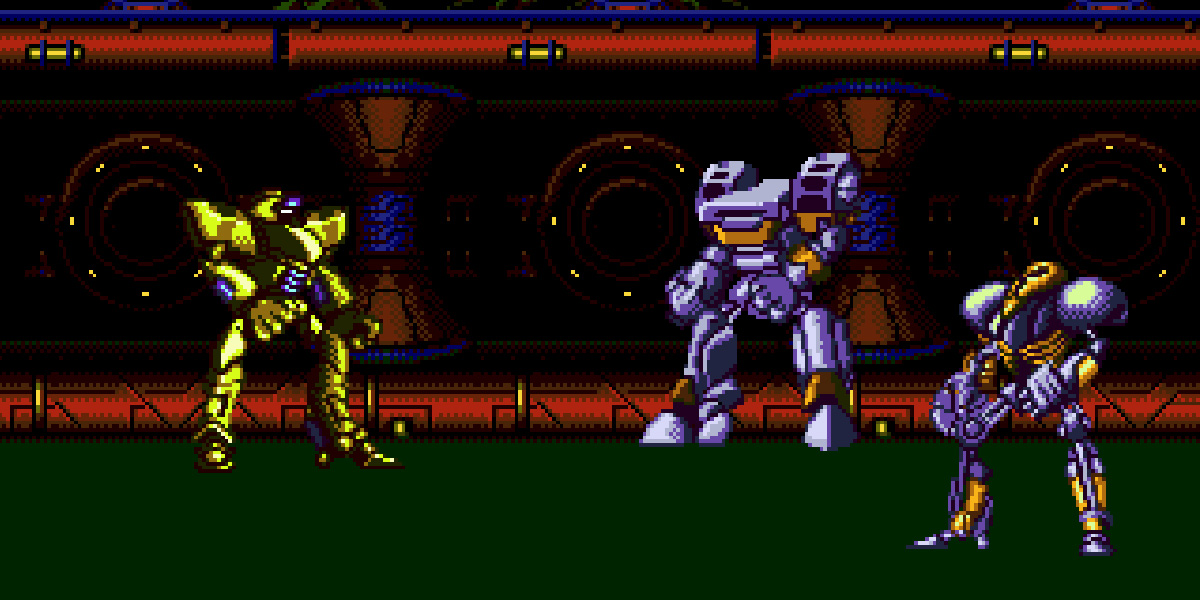 Cyborg Justice was developed by Novotrade International, a Hungarian game company known mostly for their work on the Ecco the Dolphin series.

The start up screen opens with a dramatic cutscene: in the year (hmm I don’t know… it doesn’t say when this is exactly, we’ll just call it the super future) your spaceship is brought down on a foreign planet by asteroids. The pilot is grievously injured, represented by this bizarre sequence where the life functions reader slowly morphs into square sound waves with a scientific implication that’s as over my head today as it was 20 years ago.

After you crossover, some unknown force transfers the pilot’s consciousness to a robot body. It thinks it’s erased your memory, but ah no, you’re Neoing this Matrix and overwriting your code! So, I guess you’ve got your original brain but this rad robot body, and you’re super pissed off about it? I’d be pumped if that was my afterlife! Is this standard protocol for treating dying men on this planet? Does that mean that all the robots you’re about to fight are all brainwashed post-humans yearning for freedom? I mean they’d have to be, right? Otherwise why would this Cybergod need your brain functions to power its robot?

Just think about that; your goal is to save yourself by literally destroying thousands of enslaved human minds.  Damn, that’s pretty depressing. I mean the only liberation you’re giving your metal brothers is the sweet release… of a circular saw blade to the face! At least it’s an epic way to go!

The coolest thing about Cyborg Justice is introduced immediately on the select screen. You can choose between six different arms, torsos, and legs, and not just six characters but any combination of their parts! There’s crusher hands, frog bodies, even Big Foot legs! You even get little demonstrations of how the saw hand or the tank legs work. It’s pretty amazing. I distinctly remember renting this game from Blockbuster as a young lad and just being in awe of this character select screen.

Have you ever been to a children’s museum where they have those stacked blocks that you can rearrange to form complete animals or mix-em up to make a lobster’s body with a beaver’s tail and a toucan’s head?  Well it’s like that, but you’re a killer robot! I’m not gonna run the numbers here, but there’s a multitude of different possible combinations to try.

So you start the game and… yeah it’s a pretty typical beat-em up: walk to the right, clobber enemies until you can continue further on to the right.

The music rules. It’s that oddly groovy bass-heavy muffled thud soundtrack that you only find on the Genesis and its funkiness is only further augmented by the way your cyborg confidently strolls. I can only describe it as somewhere between a pimp strut and power walking, but trust me, he’s a robo-swinger.

The graphics are pretty rad. The backgrounds and colors are well rendered and the cyborg sprites are massive and detailed. They have a ton of animation details for each move, some of which are pretty subtle, and it’s a level of design you don’t see too often in sprite animations of the time.

The central aspect of the gameplay (aside from the robot customization) is the variety of attacks you can perform. If you’ve played TMNT II on the NES, you’d remember that you can swing your weapon, jump swing, or jump kick for three varied attacks. In Cyborg Justice you have over 20 MOVES! You’ve got a kick, a back flip, a knee, an uppercut, a waist latch (whatever the hell that is); the list goes on and on! Seriously, the newest Street Fighter has less options than this.

Unfortunately, Cyborg Justice’s ambition with its versatile move list is also its greatest flaw. There’s no tutorial section or anything, so you’re thrown into the first stage with an arsenal of weapons and no clue how to use them. Even if you have the manual or a FAQ open in front of you, the moves require multiple inputs to pull off and the buttons do not respond the way they’re supposed to.

You’ll mash wildly trying to quickly press and then hold the A button in an attempt to use your radical flamethrower arm and then… nothing happens.  The enemy’s got it figured out though and just walks right over and rips your arm straight off. Awesome! How do I do that… hmmm hold the A-button and the D-pad away (in close). “Did I do it?”  Hahaha no, no you did not. I mean to crouch you have to hold the C button, then the D-pad down or down-away (hold), then release the C-button. That’s so unnecessarily complicated!

When you do finally get your rocket arm to work, you’ll see that it takes so long to get going that your opponents will easily walk up and wreck you before you get a shot off.  As such you’ll find that it’s far easier to take the 8 year old’s approach to fighting games and just jump kick everyone in sight. Not only are the controls way too difficult to easily execute, but the hit detection is mostly “swing and a miss from a foot away” which in turn makes hitting the already challenging enemies unfairly harder.

It’s really a shame too because there’s so so much potential here. The customization of your robot is a very cool and unique concept, the overall presentation is pretty great, and it’s two player, which is always a plus! With a simpler control scheme in place Cyborg Justice could’ve been like Streets of Rage meets Mega Man. Instead it perfectly fits the adjective you’d use to describe a slow moving, awkward fighting robot: clunky.