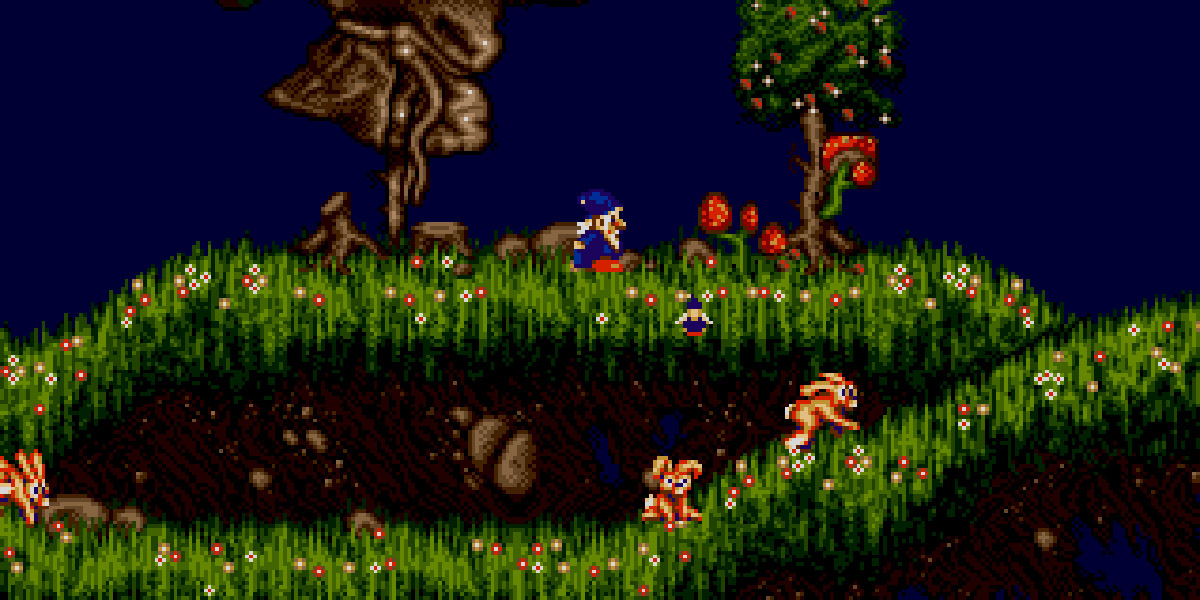 Honestly, it’s a bit of a stretch to call Wiz ‘n’ Liz a platformer. Sure, you can jump and run, but it’s more like an arcade game where you’re racing against time and trying to get the best score possible.

In this game, you can control either Wiz, who is a wizard, or Liz, who is a witch. And fortunately, there is a 2-player mode where Wiz and Liz can compete against each other.

The goal is to collect all of the rabbits on each of the eight stages. You can also collect fruit on each stage, which you can combine into a cauldron on the hub world to get bonuses.

The game sounds incredibly simple, and that’s because it is. But it also has the fun fast-paced action that the Sega Genesis was known for.

You will run and jump around the stages, quickly collecting rabbits until you’ve collected them all. The levels wrap-around infinitely, so there are no significant slow downs to your rabbit collecting endeavors.

Once you’ve collected all of the rabbits, you need to find the exit. All of this is while the clock is ticking — and the clock carries over to the next levels. Since the timer isn’t reset between stages, you can boost your chances of winning by learning what kinds of bonuses you can get by combining fruit in the home world, as mentioned earlier.

It’s important to mention that Wiz ‘n’ Liz doesn’t have any normal enemies to attack or avoid. So the only thing holding you back from succeeding is your own speed (or lack thereof).

A modern comparison of this game that I can think of would be Crazy Taxi, except with rabbits and wizards instead of taxis.

The graphics in Wiz ‘n’ Liz are nothing special, but they’re certainly not bad. All of the sprites are small and cutesy, which makes this game easy on the eyes. The levels also have different landscapes, and it’s refreshing to constantly see new environments, even if the gameplay is fundamentally the same between each level.

You definitely need to pick up Wiz ‘n’ Liz if you’re looking for frantic Sega Genesis action or a casual 2-player game.