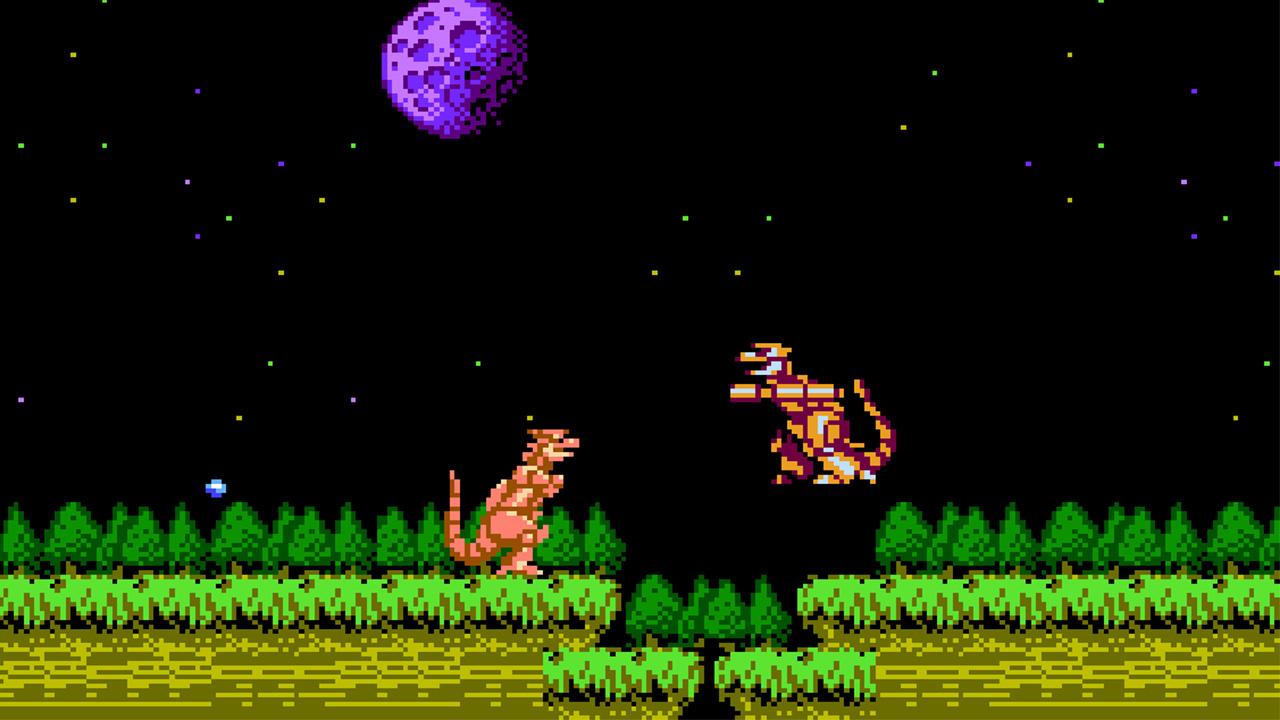 When I saw an incredibly cheap NES game titled Dynowarz with a huge dinosaur on the cover, I knew that I had to pick this one up. After playing it, I’m glad that I only spent $3 on it.

Dynowarz: Destruction of Spondylus was published by Bandai in 1990. At the time of its release, it received mostly negative reviews. The negative reception was rightfully earned in this instance, and I’ll explain why.

The portion of the game with Professor Proteus is essentially a platformer. You travel screen-by-screen, similar to games like Cybernoid, defeating enemies and carefully jumping from platform to platformer. 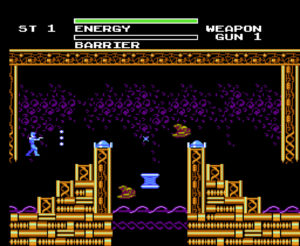 It’s actually pretty easy to defeat the enemies. Your energy bar (health) is extremely generous and your gun has a split shot by default. The bad part is that there is absolutely no variation in the enemies. They’re all the same common enemies that die pretty quickly.

The platforming, on the other hand, can be difficult. The character’s jump just doesn’t feel quite right and it takes some time getting used to. If you accidentally fall into a pit, you need to start the entire stage all over again. You only have one life and one chance before you get a game over. Fortunately, there are infinite continues, so the game is actually quite forgiving.

In the last room, you have to defeat a giant eyeball boss. After defeating the eyeball, you need to traverse all the way back to the beginning, making sure not to fall to your death or else you’ll need to start from the beginning of the stage.

The second portion of the game takes place in a dinosaur mech suit, which is apparently called Cyborasaurus. The Cyborasaurus stages are much more combat-based without any difficult platforming. 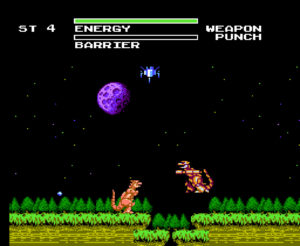 As you defeat enemies, they’ll drop random weapons. If you manage to double-up on one weapon, it’ll reach level 2 and then 3. These weapon drops happen quite frequently, so if you’re not paying attention, you’ll frequently be swapping out your weapon for a potentially worse weapon.

Some of the enemies are pretty janky, and it sometimes feel impossible to avoid them all the time. For example, there is a flying dinosaur, but you can’t aim up or down in this game, which makes fighting flying enemies difficult. Fortunately, the energy bar in the dinosaur stages is also extremely generous. As a result, it’s pretty easy to just tank through the dinosaur stages.

At the end of the Cyborasaurus stages, there’s a quick boss you need to defeat before you’re on your way to another human stage.

In general, the gameplay is incredibly stale. Once you’ve played through one level, you’ve pretty much played them all.

The graphics are nothing special. There is a little bit of variety in the Cyborasaurus stages, but they all have a boring black background.

The human stages are even worse. The developers reused the same assets for each room. Sometimes it seems like rooms from early levels were completely copied to be reused for later levels. It wouldn’t be a big issue that they reused assets if the graphics were actually impressive, but they’re not. As I’ve said earlier, once you’ve played through one level, you’ve played through them all. 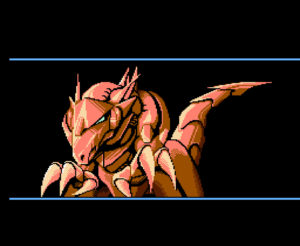 However, I was a bit impressed by the pixel art of Cyborasaurus that they splash in between levels, but they reuse that same picture over and over again.

Compare this to the Ninja Gaiden series, which had multiple beautiful pixel art cutscenes. It’s clear from the Cyborasaurus art that the Dynowarz developers were perfectly capable of creating beautiful cutscenes like those in Ninja Gaiden, but they just didn’t. Obviously, not much effort was put into this game.

I paid a few bucks for this game, and that seems about right. Don’t get me wrong, Dynowarz is not an awful game. At least it’s not a frustratingly difficult game. Simply put, Dynowarz just isn’t good.