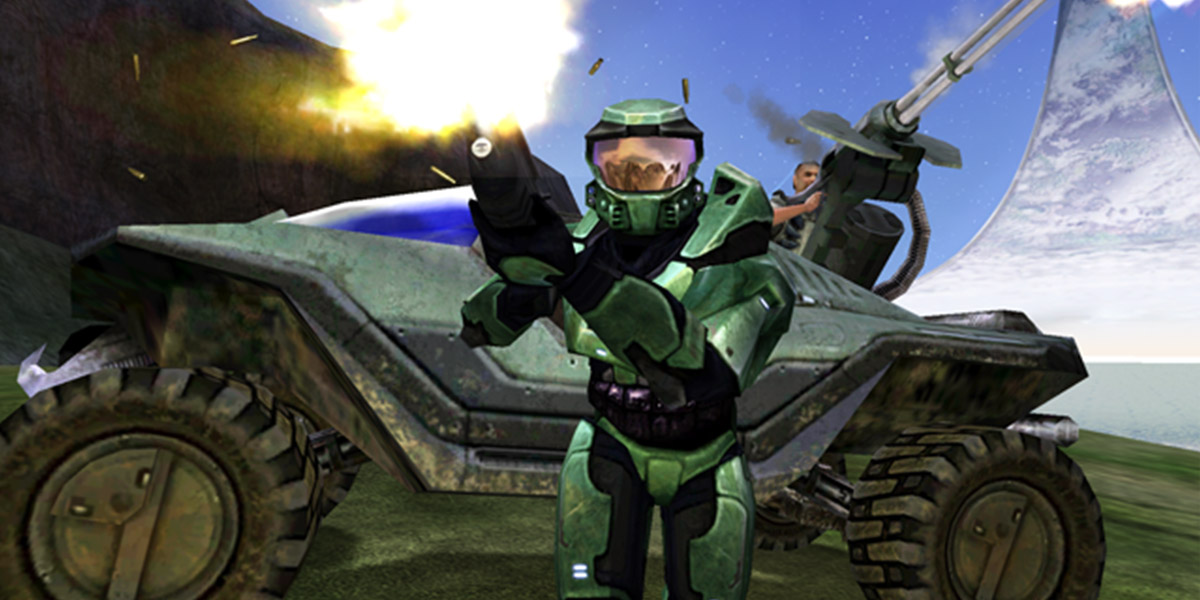 I remember a time well into the 7th generation of consoles where hyped up FPS games (and even 3rd person shooters) were called Halo-killers. It’s hard to recall that time now, what with yearly Call Of Dutys, service-style games like Destiny, and the disappointing Halo 4 and 5 looming in our recent memories. But I promise you there was a time when Halo was the biggest name in console shooters, and it was thanks to Halo: Combat Evolved.

The release of Halo was genre-defining for First Person Shooters. Halo brought together so many different aspects of the genre and solidified them into one system that worked well. Few prior FPS games allowed a player to melee, throw grenades, swap weapons, and use vehicles with such fluidity.

Truly amazing for a game that began life as Dreamcast-exclusive Starcraft-style RTS.

A widely attributed Picasso quote goes “good artists borrow, great artists steal.” Halo borrows and steals liberally from all the good FPS games of the previous generations. That’s not to say the game doesn’t only advance the genre by perfecting the FPS mixture — Bungie added their own ingredients to this one as well.

Rather than the previous generation’s emphasis on carrying every single gun and rocket launcher you find in Bond’s suit coat, Halo: Combat Evolved allows only 2 weapons at a time. This brought both more thoughtful and faster-paced gameplay to the genre.

Halo allows you to spend enough time with it to think you’ve got everything, and then it introduces an entirely new enemy type which forces the player to change their combat style. The introduction of The Flood is such a memorable experience for first-time players.

Some people criticized the level design in the day as repetitive and confusing, which I can see — you do play several earlier levels backwards towards the end of the game. But the level designs are convincing and unique in scope. Few other games of the time had levels that started you on foot in a linear environment, gave you a vehicle, then let you use it in a semi-open world environment to tackle three objectives in whatever order you liked.

One of the strongest hooks with Halo: Combat Evolved is the excellent worldbuilding and story. In story writing, one mark of a strong story is where the reader (or gamer) is shown how the world works, rather than explicitly told. When you’re dropped into the first level, you don’t know much: you’re a doom-guy look alike that’s 2 feet taller than everyone else and you’ve been paired up with an AI. You’re fighting aliens. That’s about it. But you discover a lot about the world simply by existing in it.

Related: A Look Back at the Dot Hack Series (PS2)

The backstory of the covenant, what Master Chief really is, what happened on Reach — some of these things are never fully explained in Combat Evolved. But they don’t matter to the story at hand. The only real exposition about the Forerunners and The Flood is delivered by a character who clearly likes to hear themselves talk. You get just enough of a taste of all this, and it compels you forward.

And yes, while Master Chief fits the strong, mostly silent, male power-violence fantasy pretty well, I think there is something feminist to be said about this tough-guy who listens and executes a woman’s orders (Cortana) without question.

Graphically, Halo: Combat Evolved was cutting edge for the time and today still looks good. There’s an impressive level of detail to the weapons and enemies.

Halo’s soundtrack is legendary. The chanting choir voices of the main theme and the segue into the bombastic drums and strings is just so memorable that it has become a part of video game culture the way Mario and Zelda’s themes have.

Halo: CE features excellent tracks full of creepy swells and sad strings cued to situations for maximum impact. This music really helps drive home the horror of The Flood or the death of certain characters. Additionally, the voice acting is very good, especially for a game in this era. The various unique grunts, groans and cries of enemies and allies alike add to Halo’s depth.

Released before Xbox Live, Halo: Combat Evolved was still a multiplayer powerhouse. At least one whole summer was spent alternating between swimming in my friend Eric’s pool and playing Halo multiplayer in his living room. On one occasion, Eric hosted a massive sleepover and we set up an Xbox Lan Party and played CE deathmatch all night.

The Halo universe has grown with multiple games, spin-offs, novels, and a movie. Hell, there’s even a book trilogy written by famed science fiction writer Greg Bear. And a new Halo game is expected sometime in 2021.

Overall Halo: Combat Evolved is still so-much-fun in 2020. It’s one of the most common Xbox games, besides the sequel Halo 2, and any retro video games store is bound to have a copy. I assume anyone reading this has played Halo, but if you haven’t or it’s been a few years, give it a playthrough. Have a LAN party — when the pandemic is over.